The Scorpio Races by Maggie Stiefvater, Or, Water horse love

Tarot card reading for this book: inverted Tower. The Tower is leaning into the sea, crumbling, with thrashing waves and stormy skies, and while it can be a card of destruction, it can also be a card of fundamental change–which describes The Scorpio Races down to the letter. 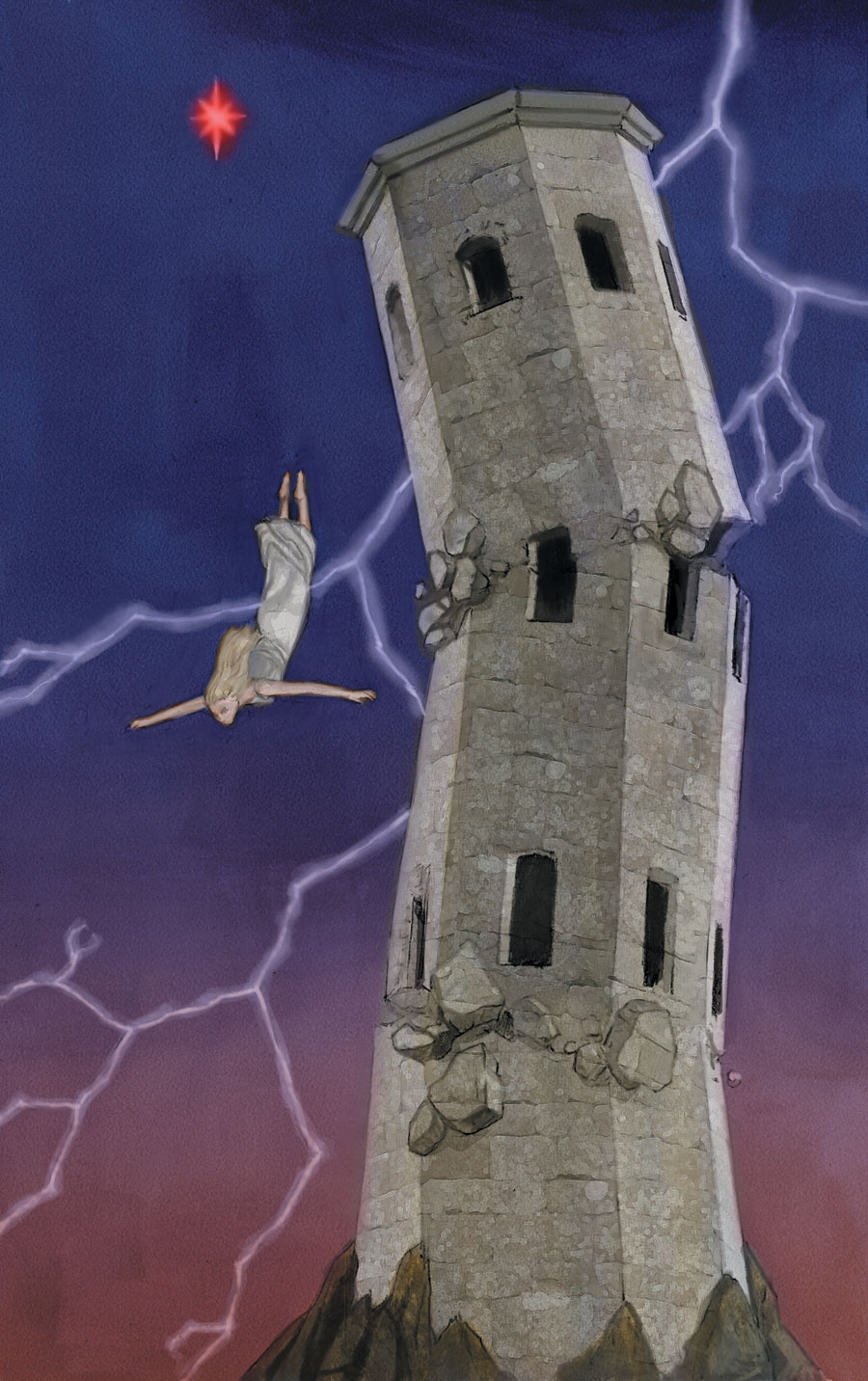 A fierce and hungry book. Even the wind is hungry here, “a live, starving thing.” The tomboyish Kate, otherwise known as ‘Puck,’ and her brothers have been orphaned ever since the carnivorous water horses killed their parents. Loss runs through Kate’s thoughts daily, ghosts of her parents and the struggle of being a family when none of the remaining children is an effective adult. One night, her oldest brother announces his decision to emigrate to the mainland, motivating Kate to enter the annual horse race that celebrates the water horses’ return to land. Even as the whole island survives because of the horses and the tourists they bring, there is a deep strand of ambivalence at the prospect of their return, as they inevitably bring carnage and death.

Narrative switches between Kate and Sean, both entrants into the lethal race. Sean is a little older, more independent, more sure, but half wild himself. He too has lost a parent to the horses, and the other to the mainland, but unlike Puck, he is only respectful of them, not fearful. A multiple race-winner, he has numerous little magics that assist him in control over the water horses–twine, spit, iron. When Puck meets him, she finds he is “a dark-haired boy who is made of all corners.” Sean’s storyline involves a jealous and vengeful beta-male attempting to best him with capturing and training the horses, not one of my favorite plots. Beta’s actions perhaps goes over the top for the justification we are given.

I appreciated the extent to which the two voices are distinct in telling their stories. It’s fascinating when they meet some of the same people, each describing and interacting with them in their own style. Puck is clearly younger, both developmentally and emotionally, but she’s trying hard to grow up: “I hope he doesn’t, because my character’s improved a lot since then. Nowadays I would’ve only thought the spitting part instead of saying it to his face.”

One of the highlights of The Scorpio Races is the language. Deceptively simple language is used extremely well, creating atmosphere and character that stands out without cumbersome description. Even something as simple as Sean watching a man carving meat is described carefully: “I am mesmerized by the utter unawareness of the entire process, the childlike pleasure Beech takes in a job ill done.” There’s quite a few ugly occurrences in this book, but something about the prose makes it darkly beautiful: “Padgett is beginning to look improbable; something about him is starting to look less like a man and more like meat.”

I enjoyed the uniqueness of the mystical element in the water horses and the mythology of the island. The mythology behind their return plays second fiddle, however, as the focus for Puck and Sean is on survival, and the options for emotional survival that winning will bring. I love the visual of the horses riding the crest of a wave onto the sand, but their bloodthirstiness and destruction thread through the book in a dark weave. Still, Stiefvater captures their swift beauty, “she is down the beach like an osprey diving for a fish” and creates sympathy for Sean’s longing and love for his own water horse, Corr. Puck’s faithful pony, (“horse!“) Dove stands in sharp contrast to the barely bridled wildness of the water horses, and her willing and realistically drawn great heart is one of the soft pleasures of the story. “She is my mare and my best friend, and I keep waiting for some thing bad to happen to her, because I love her too much.”

Overall, and enjoyable read that I’d recommend. It’s grim but not despairing; there’s a gently developed love interest that rises beyond the constraints of most YA romances, and the main characters are unique, sincere people doing what they can.

1 Response to The Scorpio Races by Maggie Stiefvater, Or, Water horse love