State of Wonder by Ann Patchett. Not really. 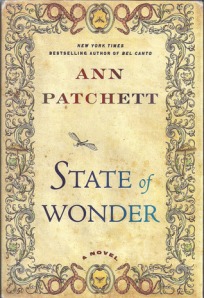 Alas, I did not reach a state of wonder reading this. I would say I was in State(s) of: Interest, Appreciation, Mild Irritation, Interest Modified by Moments of Irritation, Shock, and then Milder Shock that dwindled into a State of General Annoyance, which would possibly make it the longest book title in history.

A super-summary: Although she trained as an OB/GYN doctor, Marina is gone to the dark side a pharmaceutical drug researcher who has studied cholesterol for the past seven years with her co-researcher, Anders Eckman. (For those of you not familiar with the pharmaceutical industry, let me give you the subtext: this product is about making money. Marina has gone from supporting the growth of life and healing to outright capitalism). Anders had been sent to remote Brazil to check in on a study the company is funding, searching for the source of a remote indigenous group’s surprising fertility. Coincidentally, the head researcher is Marina’s former supervising doctor before she dropped out of the OB/GYN program. One day, the head researcher, Dr. Swenson, sends an note saying Eckman has died, and Mr. Fox, who Marina calls ‘Mr. Fox’ despite having an affair with him, sends Marina to Brazil to investigate.

Marina’s a product of both Indian and Minnesotian Norweigian heritage, and part of State of Wonder seems to be about her reconciling her life. I say “part,” because while she is suffering from anti-malaria drug dreams, she usually dreams about her Indian father and not the white mother who raised her. The history never quite makes the jump from dreamland to reality, however, and only emphasizes the extent to which she is disconnected from her own life. The thought of meeting Dr. Swenson again also brings up lingering conflict about her medical residency in obstetrics, and her decision to leave the program.

Apparently, the overall story themes bear some parallels with Joseph Conrad‘s Heart of Darkness, which I have not read. Perhaps then this book would have resonated more. But do we really need a feminine re-interpretation and modernization of “man-goes-to-heart-of-Africa” novel? It’s rather an obnoxious premise: journeying to the wilderness to find the source of female fecundity. Um. Is it possible to be less literal about the journey to discover self/the heart of female mystery?

I was half expecting the imperialist overtones, so to have a narrator who hails from multiple ethnic backgrounds was an interesting twist. It felt a little like a crutch, however, to have her hail from Minnesota and raised by her white mother; as if then Patchett could draw on her own voice and not develop the voice of someone who moves between multiple cultures. It reminded me quite a bit of Kingsolver’s The Poisonwood Bible in that people who identify with American-dominant culture are transplanted to the most remote place possible and set up to interact with “primitive” cultures. (Understand, I’m in no way calling the other cultures primitive, just that the culture clash is set up as two extremes from an imperialist perspective).

I do enjoy Patchett’s prose, which is what ultimately saved this book. The first paragraph begins with an Aerogram, and anyone who has used it can identify with the description of “a breath of tissue so insubstantial that only the stamp seemed to anchor it to this world.”

I was particularly moved when Marina wanted to dog to stay as they broke the news of Anders’ death to his wife: “‘I like dogs,’ Marina said, thinking it was vital that he stay. The dog would have to stand in for their minister if they had one. The dog would be Karen’s mother, her sister, whoever it was she wished was standing next to her when everything came down. The dog would have to be Anders.”

Unfortunately, her prose could not quite bring Marina to full, vivid life. She drifted along a path set by other people, and persisted in lacking any agency in charting her own fate. She is disconnected from herself and her world, making it hard for the reader to care about her. Furthermore, as someone who is deeply immersed in medical culture, I didn’t feel she represented or conveyed the voice of someone who invests in medical school to become an OB/GYN. She lacks passion for people, a commitment to her community and a drive to succeed. As a character, we have very little information on how she spends time besides her work in the lab. Dr. Swenson, on the other hand, is a dynamic force of a person, directing, orchestrating, manipulating. She is a far more interesting person, even though she is not particularly likeable.

What ultimately decreased my rating was the ending. Marina spends pages and pages getting to Brazil, pages and pages waiting in the city, Manaus, and then some time acclimating to the jungle, but in the last 25 pages, Marina makes a major discovery and two extremely significant events occur that will reverberate throughout many lives. After the slow build, it was shocking; though it technically resolves plot points, it was an emotional cliffhanger of an ending that seemed remarkably incongruous with the character development we had.

I’ve enjoyed Patchett’s other books, specifically Bel Canto and The Magician’s Assistant, so I won’t take Patchett off my ‘authors to watch’ list.

avid reader and Goodreads reviewer looking for a home.
View all posts by thebookgator →
This entry was posted in Book reviews, Fiction and tagged literary fiction. Bookmark the permalink.

5 Responses to State of Wonder by Ann Patchett. Not really.