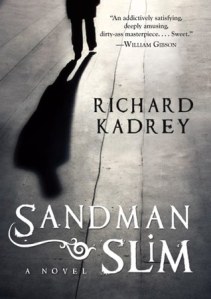 After the second read-through, I’ve come to the conclusion that Sandman Slim is Jason Statham starring in a Simon R. Green Nightside story. Pulpy urban fantasy on steroids, it’s perfect for an adrenaline read, but I recommend a pass if you are in the mood for deep thinking or don’t feel up for violence.

Jason-cough- I mean, Stark–has made it out of Hell and is looking for revenge. Eleven years ago, six fellow members of a magic circle sent him to Hell, and his mission is to kill them all. Landing in a Hollywood cemetery, he quickly robs a suit and steals a car. After stopping at the Bamboo House of Dolls bar for a drink, he finds Kasabian, circle scapegoat, running a porn shop on the Hollywood strip. He meets Kas’ manager, Allegra; goes on a shopping trip for new leathers and boots; and stops at his old apartment where he finds Vidocq, an alchemist, a thief and an old friend. Money is an issue if he’s going to complete his goals (isn’t it always?), so Vidocq hooks him up with a storekeeper that needs an odd job or two done.

I read voraciously until about a third in, when it became more of a struggle. Somehow, that seems backwards. There were several interesting ideas that elevated it above the mundane, including Stark’s acquired resistance to injury, the Jade and the underlying celestial conflict. I found the Jade especially enjoyable, her Chuck Taylors and their ‘first date’ together. While the Sub Rosa was a snooze, the Inquisitor Medea was nicely described and menacing. Somewhat dreading a stereotypical war of heaven versus hell, I enjoyed Kadrey’s solution to the traditional plotting dualism. The ending had a great plot twist that surprised me.

More troublesome was the middle of the road creativity, largely of the kitchen sink variety. I think my eyes rolled about the time the Nazis showed up to toss the bar. I know they did when there was a trip to the magic emporium, and by the time the Men in Black appeared, I’m sure I looked possessed. Then the dialogue had loads of one liners made for action movies, with far too many cultural references. Brad Pitt? Scarface? Two Donald Trump references? Suuuure, eleven years in Hell. Sure, the devil steals cable.

A number of inexplicably odd tactical moves and inconsistencies left me wondering if Stark was supposed to be dumb, or the plotting was just that underdeveloped. Yes, I know I’m talking about logic in a book about a man who escaped Hell. But the general idea of a fantasy/sci-fi book is that the logic of the world and the characters needs to be consistent. Since the world basically was, I was left with the conclusion that the protag wasn’t heavy on the thinking skills. One minute concerned about exposure, the next minute not (view spoiler) One minute making a deal about having a job (albeit owning a porn shop), the next minute not (blood on the floor? Paying the stoner help?). Decides he’s fine without his friends then (view spoiler– drops/risks everything to help them ). Then the hero is a bit of a Mary Sue fighter–talented, invincible between his physical fighting skills, his damage proofing and his magic key. But oh-so-dumb. Not my favorite kind of hero.

There is a lot of violent imagery here. Not that there are violent scenes–which there are, but usually not gore-focused–but our hero also fantasizes about violence. But his is the good clean, funny variety, while the bad guys go for real evil.

Overall–enjoyable, definitely a fast read. Doesn’t seem to be taking itself too seriously, so for the right reading mindset, it’s a nice bit of fun. I’ll try the next just to see where several interesting shiny bits might lead, and maybe to answer the question where the Sandman Slim label comes in.

avid reader and Goodreads reviewer looking for a home.
View all posts by thebookgator →
This entry was posted in Book reviews, fantasy, Urban fantasy and tagged action, anti-hero, urban fantasy. Bookmark the permalink.