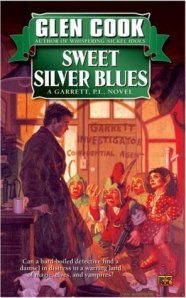 It’s likely a sign of aging, but my brain kept distracting me with that song from the nursery rhyme about mares eat oats and does eat oats.

The song slurs it all together:

So every time P.I. Garrett’s sidekick Morley Dotes appeared, a half-elf notorious for his fighting and gambling, I found myself starting to rhyme, clearly making it impossible to view him with a shred of trepidation. Is it too much to ask if Cook would rename the character?

This is the first in a series starring Garrett, an ex-soldier trying to make a living as a detective. The twist is that the setting is a fantasy world peopled with gnomes, elves, vampires, unicorns and centaurs. Don’t worry, this isn’t Rainbow Fairyland colored in pastels; we are talking about Glen Cook, after all, so the gnome ladies have nasty tempers, the vampires are all cold predators, the unicorns hunt for meat, and the centaurs have a tendency to work the angles. Initially, Garrett does some investigating around town, but it isn’t long before he hooks up with a friend, Morley Dotes, to provide him with some muscle. Morley convinces him to hire on three grolls (goats gruff?) instead of pack mules. It’s a fun plot that centers on tracking down a mysterious dame for an inheritance, a woman who just happened to be Garrett’s first love.

Cook’s trademark paucity of details is a perfect match for the hard-boiled detective. I disliked the Black Company series for it’s lack of world-building and environmental-social context, but it works well for the detective caper. Language is enjoyable, and for me, one of the redeeming aspects of the book. Cook uses a modified period cant that sometimes requires a moment of double-think to interpret. For instance, there’s a fight: “A club whipped the air where my head had been. I have the guy a kick in the root of his fantasies, then clipped him in the cheek as he bent to pray.” Garrett’s the a peculiar way of talking elevates it a bit above simple farce.

Names aside, characterization is acceptable, even if they all resonate anti-hero. Again, trademark of what I’ve read of Cook’s, where even people with more noble intentions are complicit in illegal and ethically questionable actions. Garrett’s slightly more on the positive side of the moral line–while he’ll lie to almost everyone (except The Dead Man) with utter sincerity, he never killed anyone. Except for in the war. Until recent events. But he didn’t mean it. However, it is worth noting the women are the worst sort of stereotypes: shrewish castigating woman; saucy barmaid with a temper; gentle unobtainable beauty that needs rescuing. Oink! Garrett and Morley are slightly more complex with back stories lending positive aspects to dubious actions. On the other hand, the majority of antagonists are confusing, involved in a barely comprehensible political maneuvering. It echoes the hard-boiled detective, where the investigator is caught in events larger than his limited scope.

I have to wonder if Morley’s silly naming was intentional; it was such an unusual name within the book’s world as well. In fact, the entire book has a fantasy-farce feel, reminding me (here we go again) of M.Y.T.H. Inc. Link / Myth-Nomers and Impervections, like part of the point is playing with literary conventions and having fantasy characters behave in inexplicably modern ways. For instance, there was a long-running joke between Garrett and Morley about vegetarian diet versus carnivore, and the effects on the bowels and mood. It was amusing enough for a short time, but eventually the style tends to grate on me. A single book is a perfect dose (Doze)–it is not a series I’d read in entirety back to back. Frankly, I rather like Lee Martinez or Pratchett‘s take on the genre if I feel like reading farce.

Ultimately, while I did buy it–it isn’t carried by my library system–I’ll likely donate it to the library so someone else with more affection for the genre can enjoy.

avid reader and Goodreads reviewer looking for a home.
View all posts by thebookgator →
This entry was posted in Book reviews, fantasy and tagged classic, fantasy, mystery. Bookmark the permalink.