The Doors of His Face, the Lamps of His Mouth by Roger Zelazny 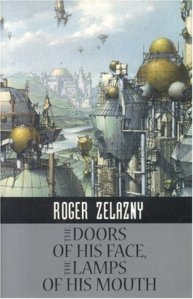 Zelazny was a master at the short, novelette and novella (rather a pity, since his world-building often leaves me wanting much more) and this collection almost consistently kicked my mental butt for his exploration of humanity and his creativity. His use of language is impressive; he can write directly, clear-cutting to a quiet moment in the middle of a hurricane, or he can weave together words to perfectly describe an alien sunrise. There is tone of melancholy running through these stories, themes of time and loneliness, but how he translates it into exotic settings is amazing. Who knew he was such a romantic? A few weaker works are included, as well as one or two that seemed like they were fun writing exercises, but even his least efforts are worth reading. A craftsman.

The Doors of His Face, the Lamps of His Mouth: (Nebula winner) Deep-sea fishing on Venus. A baitman takes one last job hunting the biggest sea monster yet, only the commission is from a makeup millionaire. She’s filming it, to boot–is Zelazny prescient or what? “Venus at night is a field of sable waters… Dawn is like dumping milk into an inkwell. First, there are erratic curdles of whites, then streamers. Shake the bottle for a gray colloid, then watch it whiten a little more. All of a sudden you’ve got day.”

The Keys to December: Haunting. Beautiful. A group of people bioengineered by General Mining to work in the cold world of Alyonal (now defunct) buy themselves a world and plan to bioengineer it to fit their physical forms. They cryo-sleep during the accelerated planetary evolution, but leave a few people to stand guard each decade, which gives them an unique opportunity to observe local evolution–and extinction. What is it to be human? To be a race? What does one marginalized species owe another? “I’m afraid,” she said…”(of) Living the way we’ve been living, I guess. Leaving little pieces of ourselves in different centuries.”

Devil Car: Zelanzy’s post-apocalyptic answer to Christine. Groups of wild escaped cars are living in the wastes, led by the Devil Car. Murdock and his artificed car Jenny are tracking him down. What does it mean to be alive and wild?

A Rose for Ecclesiastes: One of his classics. An internationally acclaimed poet with a knack for languages is invited to Mars. He becomes the first human to learn the Martian language, and the first invited into the inner sanctum to see the Martian dance, a mix of spirituality and poetry. “For the next three weeks alphabet-bugs chased each other behind my eyelids whenever I tried to sleep. The sky was an unclouded pool of turquoise that rippled calligraphies whenever I swept my eyes across it.” Braxa, the performer, becomes his tutor, and he gains more insight than he expected into the Martian race and a prophecy. A poet as narrator gives Zelazny full reign of wordsmithing. This one is a heart-render.

The Monster and the Maiden: a quick two-pager with a twist.

Collector’s Fever: a nephew with ulterior motives collects a Stone that doesn’t want to leave. A bit silly, a bit of social commentary. Kind of cute.

This Mortal Mountain: a mountain climber and his team attempt the impossible, the highest mountain in the universe, a mountain higher than the atmosphere. Similar to “A Rose–” it involves a man at the peak of his profession seeking the ultimate challenge. As they climb, his team is not only challenged by winds, but by visions. Poetic beauty; makes me almost identify with mountain climbers, but the quote I found to share contains the ultimate insult: “‘You tipped off the press,’ I said. ‘Now, now,’ he said, growing smaller and stiffening as my gaze groped its way through the murk of his central nervous system and finally touched upon the edges of that tiny tumor, his forebrain.”

This Moment of the Storm: One of my favorite Zelazny novelettes. A storm predictor and a world hopper predicts the big storm. He works with the Mayor to watch, predict, and steer the city through the Big One, even as society is disrupted. Heartbreaking. A classic, this one is in other collections as well, and is one of my favorites. Begins and ends the the philosophical question of What is Man? “As she looked down into her coffee, I saw a little girl staring into a pool, waiting for it to clear, to see her reflection or to see the bottom of the pool, or perhaps both.”

The Great Slow Kings: seems to be a thought exercise: what would be the perspective on life of beings whose lives spanned millennia? “Drax had been musing for the past four centuries (theirs was a sluggish sort) over the possibility of life on other planets in the galaxy.”

A Museum Piece: a gorgeous but critically unknown artist decides that “if one could not live by creating art, then one might do worse than turn the thing the other way about, so to speak.” In true Zelazny fashion, he not only meets a woman, but an alien. A whimsical tone pervades. “He should have hated being reported stolen during the first week of his career, with nothing to face then but the prospect of second-rate galleries or an uneasy role in the cheerless private collections of cheerless and private collectors.”

Divine Madness: a man is caught in a time loop relieves the death of his wife. Remarkable writing technique in capturing the backward loop. “How does a man undo that which has been done? He doesn’t. There is no way under the sun. He may suffer, remember, repeat, curse or forget. Nothing else. The past, in this sense, is inevitable.”

Corrida: a strange little tale where a man awakens in a bullring. Another short-short, this was one of my least favorite in the collection.

Love is an Imaginary Number: pre-Amber? A demigod tries to escape. Reads much like an Amber short, shifting and escape-focused. “They had made me to forget. They had nailed me with love.”

The Man Who Loved the Faioli: “The Faioli were known to come to a man the month before his death–those rare men who still died–“ Another haunting, love-lost tale that has the essence of wish-fulfillment about it.

Lucifer: a man who misses the lights and life of the city struggles to get the generators running. An ode to great cities.

The Furies: a little sci-fi opera with a space pirate, an empath, an assassin and a space geographer. A great chase tale with build and tension. What an ending!

The Graveyard Heart: a man meets a beautiful woman who is a member of the Set, an elite, eternal group. In order to be worthy of joining, he needs a lifestyle change and to pass an interview with the head maven. Another one where Zelazny plays with the pinnacle of career, manipulation of time and love.

“He realized, then, that his goals has shifted; the act had become the actor. What he really wanted, first and foremost, impure and unsimple, was an in to the Set-that century-spanning stratocruiser, luxury class, jetting across tomorrow and tomorrow and all the days that followed after–to ride high, like those gods of old who appeared at the rites of the equinoxes, slept between processions, and were remanifest with each new season, the bulk of humanity living through all those dreary days that lay between. To be a part of Leota was to be a part of the Set, and that was what he wanted now. So of course it was vanity. It was love.”
Genius.

10 Responses to The Doors of His Face, the Lamps of His Mouth by Roger Zelazny