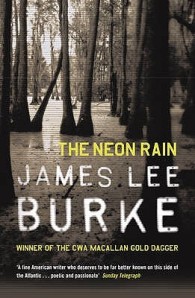 Recommended to Carol by: Anthony Vacca
Recommended for: fans of detective fiction, southern gothic
Read on May 21, 2013
★ ★ ★ ★

One of the movies on endless repeat with my best high school friend and I was The Big Easy with Dennis Quaid and Ellen Barkin. That and a couple trips to New Orleans are the sum of my Louisiana experience, and yet, when I read Neon Rain I feel as if I’m there, ghosting alongside Dave Robicheaux as he investigates. Burke’s writing is extremely evocative, in the very best way for the detective-centered mystery. A strong since of place, of the cultural gumbo of New Orleans and the surrounding rural area clinging to its heritage by fingertips.

It also has an equally strong sense of a narrator in turmoil. It’s a powerful book that begins with a New Orleans Police Department detective, Dave Robicheaux, visiting an former informant on death row, only to learn about a death threat against himself. Coincidentally, he recently discovered the body of a young black woman while he was fishing in the swamp. Something about the needle-tracks down her arm and her death doesn’t feel right to his instincts, and he starts hounding the rural sheriff’s department to follow through with investigating the death.

Characterization in this book is riveting. Robicheaux is the cop with his own code who slowly learns no one else shares, that he’s holding to values from another time. It’s interesting to watch his gradual realization; he believes he’s so cynical, so dialed in in the beginning, and he’s a bit right. Early on, when he meets with the parish sheriff to request an autopsy for the drowned girl, he ends up in a contest of wills that nearly becomes disastrous. Back in New Orleans, he harasses a porno theater owner, looking for the word on who wants to kill him. Both times, he’s so sure of his stance and the way to manipulate the situation for results–but then is surprised when it comes back at him. Slowly, it dawns that everyone is working their own angle. He suspects that, he halfway knows it, but he can’t quite conceive the absolute depth of the dishonesty.

Robicheaux also struggles with memories from the Vietnam war, and many of his coping strategies seem to stem from wartime experience. Its interesting being reminded of the psychological impact of a war that hasn’t been on our cultural consciousness for twenty-five years, overshadowed by more recent ones in sand and desert. My dad was in Vietnam, and I remember that period in the 1980s when I kept bugging him to talk about his experiences, first because of Platoon and then later Born on the Fourth of July. That’s the kind of book Burke has written, far-ranging and capable of recapturing a lost cultural time, and conjuring up memories of one’s own.

The lush descriptions of the setting are beautiful, and Burke does more with light and smells than any other mystery writer I can think of, immersing the reader in the scene. Yet when the action comes, it’s powerful and direct, even if it takes place in flashbacks. His first sentence guaranteed I would keep reading: “The evening sky was streaked with purple, the color of torn plums, and a light rain had started to fall when I came to the end of the blacktop road that cut through twenty miles of thick, almost impenetrable scrub oak and pine and stopped at the front gate of Angola penitentiary.”

The ultimate connections between the unknown woman’s drowning, [spoiler] the Columbians, the federals and the general [end spoiler] are a bit confusing, but after some thought, I decided I rather liked it. How often is it, after all, that the right hand knows what the left does? It gives a bit more of a real-life feeling, where not all the odds and ends tie in, and sometimes people will act in ways that remain inscrutable. You can wonder, guess, and interpret but you might not ever know. There is a little more violence than my normal level of comfort, but its handled well. One section, (view spoiler) seemed excessively showy and not particularly realistic. Still, it ended up being a powerful scene when he survived and the agent didn’t.

Downsides? Plotting a little chaotic. Robicheaux is a very tortured soul, which while very well done, is not always comfortable to read. A little more movie-level violence than it really needed. Political complications with <spoiler>Central America</spoiler> very typical then, very lost in history now and confusing. Still, an amazingly good read.

avid reader and Goodreads reviewer looking for a home.
View all posts by thebookgator →
This entry was posted in Book reviews, Mystery and tagged mystery. Bookmark the permalink.

2 Responses to The Neon Rain by James Lee Burke