Anarchy and Old Dogs by Colin Cotterill. Or, Even old dogs can learn new tricks. 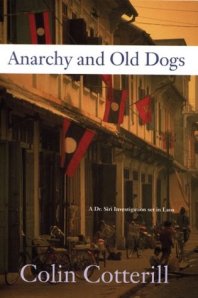 This time Dr. Siri and his long-term comrade Civilai are drawn into an investigation after a blind dentist is found dead, a letter written in invisible ink tucked inside his pocket. Dr. Siri consults a school teacher to break the code (and how I love Cotterill’s affection for talented teachers!), leading Siri and Civilai on a journey to the southern city of Pakse. Siri’s incompetent boss, the Judge, provides the transportation south, with the caveat that Siri investigate a possible bathtub electrocution that could have been caused by the Russians. As he works the political drowning case, Siri also pursues the mysterious letter as well as a local village boy’s drowning. Malignant spirits lurk in the background, a chance meeting in Pakse allows Siri to connect with his rebel days, and Dtui and Phosy, Siri’s faithful associates in the coroner’s office, take initiative while he is gone.

Anarchy contains everything there is to love about the Siri investigations. There’s bits of shared Laotian culture, particularly a funeral and wedding, both with insight into ceremonies before and after the communists have come to power. There is evolving political commentary on the nature of government and revolutions. Notably, Cotterill achieves the rare feat of being simultaneously hopeful, disillusioned and uniformly critical of all forms of power. The Lao people are starting to notice the communists were failing to create a revolution, except in red tape. “The government was starting to look like a depressingly unloved relative who’d come to visit for the weekend and stayed for two years.”

Leavening the seriousness of the political landscape are meltaway bits of humor, particularly Aunt Bpoo the mystic. I started to get worried when a transvestite was described as “a luminous beacon–and definitely a buoy,” and I knew there was troubled waters ahead when I ran into the line, “it’s hard to hold a serious debriefing with a man who’s ripping off his pants.” Yes, you read it–puns launched a subversive attack on a somber and contemplative mystery. Luckily a state-sponsored narration of a Bruce Lee movie provides some genuine comedic relief.

Aging remains a consistent theme, and I’ve come to enjoy the perspective of the older adult and the freedom that a lack of political ambitions can provide a narrative. I myself have noticed a similar experience to Siri’s encounter with a pair of policemen: “As they entered, Siri looked at their boyish faces and noted how narrow the gap was becoming between puberty and authority.”

Ah Siri, one of my favorite detectives. I hope by the time I am seventy-three that I too will “hardly ever flew into a rage or insulted anyone who didn’t absolutely deserve it.”

Criticisms include a enormous development in the Dtui storyline without adequate background and a somewhat obvious antagonist.

3.75 stars, rounding up because I’m hoping to adopt Dr. Siri.

avid reader and Goodreads reviewer looking for a home.
View all posts by thebookgator →
This entry was posted in Book reviews, Mystery and tagged four star, multi-culti, mystery, supernatural mystery. Bookmark the permalink.