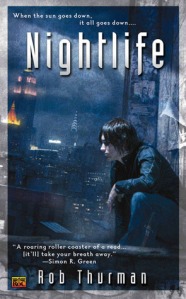 Thurman‘s Leandros series tends to be very dark, both in world view and in the voice of the sardonic, damaged narrator, Cal. It’s one way the book distinguishes itself from it’s UF brethren, but also inhibits me from issuing a ringing endorsement. I can only take so much of the sarcastic, callous, lazy narrator before my inner drill sergeant is tempted to provide a swift kick in the narrative.

One of the most interesting things about the series is that the relationship between the brothers is a focal point for their characters and for plot development, and that seems a little more unique in a genre known for independent and wise-cracking detectives. Nightlife introduces us to Cal and Niko’s attempts to avoid a particular group of monsters, the Auphe, as they take refuge among the human herd in New York City. New York, of course, is full of monsters, termed ‘Grendels’ by the brothers, providing numerous sources of information and conflict.

Thurman’s writing is a good example of the better urban fantasy novel. World-building is well done. She frequently weaves in major literary references, particularly Shakespeare, but is usually kind enough to reference it for the education-impaired reader. Character development seems strong, and it’s an interesting choice to have the caustic Cal be the narrative voice instead of his more educated and thoughtful ninja-brother. They have a seriously co-dependent relationship. I enjoyed the introduction of Robin, who provided touches of lecherous humor, but also a streak of believable loneliness. The monsters were multi-dimensional as well. The bridge troll was particularly horrifying, but save some horror for the fiendish Auphe.

[SPOILER] At the point that Darkling manifests, the narrative takes a particularly dark turn. While I believed the merged personality and the psychopathic overtones, [END SPOILER]

it wasn’t a character I enjoyed reading. The first time through, I tended to skim it just to get the major plot points. During the second, I focused more on the quality of the writing, and I have to say it was very impressive, but just not to my taste. The resolution was believable, if somewhat predictable, and introduced two characters that will continue to appear in later books. I enjoyed the NYC setting which is decently realized but doesn’t overtake the story.

A three and a half star ride.

avid reader and Goodreads reviewer looking for a home.
View all posts by thebookgator →
This entry was posted in Book reviews, fantasy, Urban fantasy and tagged my library, supernatural mystery, urban fantasy. Bookmark the permalink.