Posted on September 19, 2013 by thebookgator 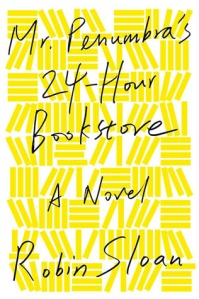 Authors are magicians. I was in the early pages of Mr. Penumbra when I realized that Sloan was sneaking in a major chain of events in only a few short paragraphs with the intention of moving the story to where he needed it. It was the authorial equivalent of “look, nothing up my sleeve” in preparation of a hat trick. Rather than irritation from this momentary flap of curtain or glimpse of rabbit ear, I was rather enchanted.

Thinking back on books I’ve loved or hated, it occurs to me that in that moment of authorial sleight-of-hand, the reader willingness to accept the underlying set-up is fundamental to the experience of the story, particularly in fantasy, sci-fiction and magical realism. A suspension of belief at the right parts, or at least belief enough in the presentation to accept and enjoy it, is crucial to a good read.

Penumbra is charming, and it was easy to be interested in Clay’s search for a job, intrigued by the mystery of the bookstore, and captivated by the charisma of Clay’s friends. Eventually, Sloan reaches a bit too far, tries a large-scale trick that requires more stage presence and set-up than he can pull off. In particular, the New York section started to feel like someone imported The Da Vinci Code. It’s the equivalent of seeing a magician at the local theater and watching them try and disappear the Empire State Building. The story veers out of control and falls apart, yet still manages to remain charm and sincerity to be worth reading.

Part of Sloan’s skill is in his ability to capture familiar emotion:
“But I kept at it with the help-wanted ads. My standards were sliding swiftly. At first I had insisted I would only work at a company with a mission I believe in. Then I thought maybe it would be find as long as I was learning something new. After that I decided it just couldn’t be evil. Now I was carefully delineating my personal definition of evil.”

There’s a lovely, lovely description of a bookstore, instantly familiar to any book-lover:
“The shelves were packed close together, and it felt like I was standing at the border of a forest–not a friendly California forest, either, but an old Transylvanian forest, a forest full of wolves and witches and dagger-wielding bandits all waiting just beyond moonlight’s reach.

A description of Clay’s co-worker, Oliver, instantly resonated with that interesting dualism of solid and dreamy:
“Oliver is a graduate student at Berkeley, studying archeology. Oliver is training to be a museum curator… He speaks in short, simple sentences and always seems to be thinking about something else, something long ago and/or far away. Oliver daydreams about Ionian columns.”

I too have a nebula friend:
“So I guess you could say Neel owes me a few favors, except that so many favors have passed between us now that they are no longer distinguishable as individual acts, just a bright haze of loyalty. Our friendship is a nebula.”

I also have to commend both Clay and Sloan for writing a meeting of a love interest that involves hair, tee-shirt, nail and chipped tooth, culminating with:
“This girls has the spark of life. This is my primary filter for new friends (girl- and otherwise) and the highest compliment I can pay.”

Despite the strong, delightful beginning, Sloan lost me by the end. I thought the quest metaphor was clever, and appreciated the connection with a fantasy trilogy and friend that were instrumental in Clay’s formative years but it didn’t quite stretch far enough. Or maybe it did, and the quest was an illusion. It’s hard to say; Sloan was showing his hand too much by the end and the spy caper didn’t fit with the sweet bookstore mystery. The romance was lost in the quest, and imperfectly resolved. Neel’s professional fascination with boobs struck me as a false note, although it had the feel of a ten-year-old voyeur over the thirty-year-old creeper. My final complaint is rooting the story so solidly in Google; perhaps integral to Sloan’s version of the story, it significantly roots it in time and will date it faster than any other element. For me, these concerns added up to too many wires and mirrors, and allowed me to lose the illusion.

Three, three and a half stars.

avid reader and Goodreads reviewer looking for a home.
View all posts by thebookgator →
This entry was posted in Book reviews, Fiction, Mystery and tagged literary fiction, mystery. Bookmark the permalink.