Game of Cages by Harry Connolly. Or, Game over. 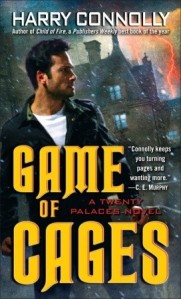 Recommended for: masochists. Fans of Child of Fire
★ 1/2

The next in my streak of reading books I’d rather not be reading. Remember when I said, “I don’t know why I do this to myself, I really don’t”? I still don’t know the general answer, but in this particular instance, I suspect the combination of series OCD, a suspicion that the books weren’t nearly as good as GR reviews claim, and Connelly’s strangely successful $50,000 kickstarter despite his publishing house dropping this series.

Second in the “Twenty Palaces” trilogy by Harry Connolly, Game of Cages essentially recycles the first book. If that distilled assessment sounds strangely similar to my review of Caliban’s War  (which recycles Leviathan Wakes), that’s because it is. Authors! Something a little different for your sophomore effort, please! Since we’re all just recycling hacks here, I’ll just click over to my other review and cut and paste a bit…

I’d never do that to you. Or to me. Because I don’t ever want to read this again, so I have to remember what I didn’t like: everything but the ghost knife and a blue dog with stars in its eyes, who must have escaped from the Beatles’ Yellow Submarine movie (which was one of the funniest, most trippiest movies I ever saw [finally explaining “Lucy in the Sky with Diamonds]. Mostly because of being under the influence, which is clearly the only way one is supposed to see it).

Plot synopsis: Ray, former convict and part-time grocery clerk, is picked up by Catherine, a member of The Twenty Palaces Society, a group dedicated to killing predators.  Catherine states they have a mole that passed on a tip about a predator auction. Since predators are beings from another dimension that feed on humans, it’s generally assumed Very Bad Things Happen when they are around. In a surprising display of incompetence, they are extremely late to the auction–the predator has already been sold and managed to escape the winners as they attempted to leave the remote estate. No worries! Ray and his new friend split up (because that’s what you do in enemy territory right after you discover a supernatural being has escaped, natch!) and he witness a murder, gets in fights, has bizarro conversations, blah blah.

Problem number one–seriously clunky plotting. A small instance early on foreshadows future inconsistencies. Stymied by a locked gate, Ray shows off by cutting it with his secret ghost knife instead of simply using the bolt cutters Catherine brought along. Although Catherine is an investigator with a secret magical society, she is confused by the spell knife, so clearly she hasn’t been debriefed on his assets. She asks for it and he refuses. She doesn’t even exert her authority to take possession though he is a ‘wooden man,’ which means disposable asset. Literally. Yet why doesn’t she know everything about him or use her authority? If she’s an investigator, why doesn’t she know more about spells? If he wants to be discreet about his prize possession (as he will continue to state later in the book), why does he flaunt it when an easier solution is available? It’s inconsistencies such as these that prevent me from losing myself in the world. The author tells one thing through overview, dialogue or first person thoughts, then has his characters do another. It makes plotting seem forced, like no matter what characters claim, they will need to do particular actions in order for the plot to move forward.

Plotting is further complicated by the ghost knife’s awesome abilities. The knife is actually a paper spell that can cut through anything inanimate, and when passed through animate beings, normally robs them of strong emotions, leaving them weak and drained. As if Connolly is aware that it is potentially a spell that could make all the difference in these altercations, Ray frequently makes excuses as to why he won’t use it against antagonists. He usually states he “wants to keep it in reserve,” but occasionally varies that justification with “I don’t want it to get taken away” or “I don’t want it to get stuck in the wall (although it goes through walls),” or even “I don’t want it to burn” (there’s a surprising amount of fire in this book). In one particularly incongruous moment, he states “Of course, I also had my ghost knife. It would hit whatever I wanted it to hit, but it was just a piece of paper. Cutting into the edge of a moving tire would probably tear it apart.” Sure, that’s believable. Because he used it on the steel chain at the beginning, and embedded it in a concrete floor earlier. You want magical tools? Fine. Use them consistently.

Problem number two–seriously clunky characters. I can’t decide if Connolly meant for Ray to be a manipulative, craven ass or he is carelessly inconsistent. I happen to hate the “I’m sorry” phrase unless it is actually apologizing for a wrong. When Ray and Catherine disagree over anything (and Ray and Annalise in the prior book), he immediately responds with “I’m sorry.” It appears Ray is aware he is doing it manipulatively, as at one point he complains that although he said ‘I’m sorry,’ Catherine doesn’t open up to him (the ultimate ‘sensitive man’ manipulation). It’s a verbal conversation strategy that Ray frequently uses.

Furthermore, Ray debates the “killing is bad” but “bad guys are bad and are trying to kill me” argument with himself ad nauseam. He agonizes over how to immobilize people that are trying to kill him, and but then, when on the run from a pair shooting at him and Catherine, lures the predator towards them so that it attacks them instead. Unsurprisingly, Catherine is pissed and Ray apologizes. He is also very judging about the Society’s use of lethal force, even as he wishes they would use it: “But still I felt ashamed, because I knew, at the core, the Society was vigilantes. I believed they had good reason to do what they did, but their day-to-day work was finding people and killing them.” I honestly can’t tell if that is meant to be a character trait or sloppy writing, because it seems to me after you’ve killed your first five or so people (all Bad Guys, mind you), you get past the guilt. But I’m guessing.

Clunky characters include the antagonists, who initially consist of a group of Chinese, a group speaking some other foreign language (Russian or German, he can’t tell, although a prisoner earlier told him German), a fat, rich Silicon Valley guy and a bunch of magic-users that call themselves “The Fellows” (no rings are presumed involved). Very stock, right down to the moment the groups of foreigners have multilingual conversations in front of a concealed Ray, in which one of them conveniently speaks English.

Lastly, it’s just sloppy. There’s one page where Ray is speculating about the blue dog, decides he “doesn’t have time for speculation” (which is exactly what investigating needs, bonehead), but then goes back to his speculation two paragraphs later. I seriously don’t understand–was that meant on purpose to show irresolute purpose/weakness of character, or did you not understand the meaning of ‘investigate/find’ or of ‘speculation?’ Why do you not have time for speculation when you are tracking something?

Don’t even get me started on how he’s always rescuing Annalise despite her amazing powers and her willingness to use lethal force.

Fine, so what was redeeming? Why’d I keep reading? Well, if it isn’t clear already, I have a book OCD–I hate not knowing the ending.

But seriously, the ghost knife is a cool idea.

The supernatural metaphysics are also vaguely interesting. The idea of the powers beyond our world trying to get in, but seemingly trapped in a particular metaphysical construct on arrival is an interesting one. I mean, what would choose to be a blue, starry-eyed dog? In this book, it’s a predator that has escaped after 22 years of incarceration. Is it starving? What’s it’s ultimate goal? Why does its behavior change? Unfortunately, while Ray speculates, he never actually gets answers to most of the questions. Even a token debrief at the main office would have provided more resolution.

So, as book compulsive as I might be, I know when to call it quits. I won’t be picking up book three, because there really are too many good books out there. Glad Connolly got his kickstarter funded, and equally glad I’m not involved.

avid reader and Goodreads reviewer looking for a home.
View all posts by thebookgator →
This entry was posted in Book reviews, fantasy, Urban fantasy and tagged meh, urban fantasy. Bookmark the permalink.