Posted on December 8, 2013 by thebookgator 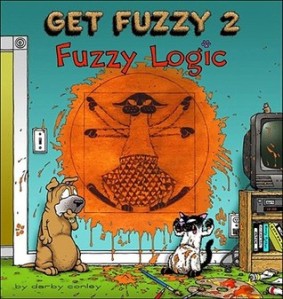 I try to bring laughter into my life, even my reading life. I’ve almost always had a comic side read, whether it be the timeless wisdom of Calvin and Hobbes, the clever feminist and cultural commentary of Sylvia, or the general sciencey nuttiness of The Far Side. But those are long over, and despite multitudes of re-reads, I need some more humor in my life. I’ve been auditioning Get Fuzzy, and while fun, it is definitely focused on pet humor that doesn’t quite transcend.

No doubt, it’s likely best suited to those used to living with the idiosyncrasies of pets, particularly dogs and cats. It also loosely applies to the challenges of living with an individual prone to crankiness. It begins with a moving forward about Conley’s childhood dog Patch. Structurally, Conley follows a mix of single-joke strips and longer storylines about Rob the graphic artist, his dog, Satchel, and his Siamese cat, Bucky. In one of the first extended stories, Bucky is convinced he can do a (local) cable show, particularly a “how to” of interior design. Something cats clearly specialize in–the “antiquing” of furniture. There’s a funny bit where Bucky discovers a coonskin hat and makes it into a vest–an amusing bit of creative play on animals wearing clothes. The less amusing panels are the ones where the three are out at a restaurant, or engaging in more human-type activity. Restaurant panels seem to be a reoccurring joke, but honestly, they miss me. For some reason, I always liked the Calvin and Hobbes version of reality–they can have a rich interaction, but if others come into the picture, it’s back to stuffed silence.

I loved the bit where Satchel dresses as a Dirt Devil vacuum cleaner for a Halloween party (“It was the scariest thing I could think of”), and the one where Rob advises Bucky, “And do us all a favor: when in doubt, nap.” Bucky, being a cat, knows brilliance when he hears it. There’s a lovely detailed Sunday-panel type of the three of them on the subway–along with Calvin and Hobbes, Dilbert, the lawyer from Doonesbury, and a couple other figures I don’t recognize. The panels where he gets to experiment with a more sophisticated drawing style are more rare, no doubt meant for a Sunday comic. It may be my humor, but I laughed out loud when Bucky wanted Rob to explain what snack food was:

“‘How is that different from regular food?’
‘You know-just little stuff. Nothing too filling.’
‘Ohh, ok. Like chipmunks. Why didn’t you just say–‘
‘I mean like pretzels.‘”

Overall, enjoyable. Definitely some audible chuckles. Just not worthy of the home library. Yet.

Oh, and cat people? Those dead animals on your doorstep? “Those weren’t ‘presents.’ They were threats!”

avid reader and Goodreads reviewer looking for a home.
View all posts by thebookgator →
This entry was posted in Book reviews and tagged comic/graphic. Bookmark the permalink.