Posted on February 7, 2014 by thebookgator 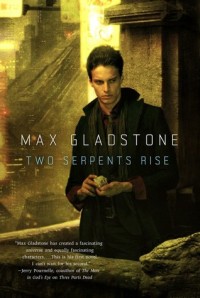 Sometimes there are books that I want to re-read, almost from the first minute after turning the last page. Gladstone’s first novel Three Parts Dead was one of those select few. One of the more original fantasies I had read last year, it easily made my “Top Reads” list. So it was with some surprise that I finished Two Serpents and found myself avoiding it, unwilling to write a review and unwilling to read again. At the end of the book, my reaction was a solid “meh,” and yet there were intriguing parts and interesting characters, so I had a very hard time identifying why it didn’t work as well as Three Parts did. As I (finally) re-read, I think the answer lies in both world-building and narrative.

Gladstone has stated that he admires Terry Pratchett’s Discworld series, which allows readers to enjoy stand-alone stories set in the same world, while sometimes building on prior characters, and he has similar sorts of goals for his world. While I applaud both his sensibility and his effort to sidestep the expectations of epic and urban fantasy readers who clamor for multi-volume story lines, this world feels surprisingly different to the earlier one, and unfortunately similar to modern city, modern era. World-building issues can be tricky in fantasy, especially fantasy set in not-Earth. Clearly, authors draw a number of concepts and logistics from worlds we already know, if only to shorthand the world-building. Most commonly, authors seem to borrow European medieval trappings: agrarian lifestyles, Christian religious structures, limited technology. I’m always intrigued when authors go outside the fantasy ‘norms,’ and Gladstone’s details on a Mayan/Aztec-like culture seemed promising.

However, it isn’t long before it appears the kitchen-sink is the main resource. Although the variety perhaps reflects a significantly evolved world, it ultimately leaves the reader groundless in a strange hybrid of modern and fantastical. How confused? Well, the casual mention of eating ‘polenta’ for breakfast, Caleb taking the ‘bus’ and an ‘optician’ advertising on a billboard felt more than a bit 20th-century, along with the ‘denim pants’ Caleb wears, the four-piece band that includes drums and cymbals, and the pretentious abstract art show opening. But then there were the dirigibles, and the ‘driverless carriages’ which echo the steam-punk tradition. Poker and bridge transcend both time periods, but again echo the real world. In the middle of towering buildings and slaughterhouses that feed the city (reminding me of the 19th century urban jungle), there are “80-story pyramids” and sacrificial alters from the Meso-American background. The there’s the author-imagination fantastical: mention of someone playing “ullamal” (which, as far as I can tell, doesn’t exist), the flying opteran (dragonfly-like personal flier), the Tzimet water demons, the connection of soul-stuff with cash. Finally, the mundane fantastical–the couatl, a flying serpent; the mythological Twin Goddesses that save the world, zombies (at the company announcement) and living skeletons.

In retrospect, what struck me most is that Three Parts showed the reader a number of small, unique magics in action: a gargoyle transforming, stealing a face, a mystical ceremony for doing an autopsy on a god. Two Serpents has very little of the mundane magical, relying on scattershot world-building and larger instances of gods’ magic. Gladstone states he wanted to have a non-magical protagonist, which is certainly fine, but then surrounding the reader with magic that he takes for granted amounts to unsatisfying world-building. It also means that if that is part of your criteria for enjoyable fantasy, this may not be as successful.

Characterization is one of the strong points of the book. Although Caleb is not always sympathetic, he is relatively complicated, albeit young.  The characters around him are interesting. Teo and her rejection of wealthy family financial shackles sounded familiar, but I liked her faithfulness to Caleb and her willingness to call him out. I enjoyed the multiplicity of ethnicities and sexualities mentioned without the characters being defined by that one trait. Caleb’s problematic relationship with his father, Temoc, a renegade priest, was fascinating, and I found myself more interested in Caleb’s back story and the interplay between the two as much as current events. There’s an interesting parallel in Caleb’s relationship with The Red King, a virtually mythological character mentioned in Three Parts. I found myself wanting to know more about the Red King, a positive sign of how well Gladstone creates secondary characters, and a negative one of my ambivalent interest in Caleb.

Pacing and plotting was a struggle for me. Ostensibly beginning with an act of sabotage directed at his employer, it soon becomes a story about Caleb’s obsession with a ‘cliff-runner’ woman named Mal (!!!) who he met at the water reservoir at the same time the Tzimet appear in the water supply. The story becomes a very thin romance, predicated on nothing but obsession, as Caleb struggles with first the ethics of being a loyal employee by turning Mal in contrasting with his desire to track her down. Failing to find Mal quickly and a side-journey into the art of cliff-running in the city means attraction between the two was slow to develop and consisted more of “meet you later” than actual encounters.  Unfortunately, during this time, there was also little focus on the issue of the water demons or political developments at Red King Limited, and Caleb appears content to have managed the crisis and is ready to move on. Apparently Gladstone was intentionally portraying Caleb’s projections of what he wanted Mal to be onto Mal, but it really didn’t gel for me in context of the larger story, particularly when her perspective was included.

So why the three stars? I appreciated the overall sense of the story; the rather mundane idea of water resource affecting a fantasy city and how to cope with growing demand (apparently somewhat modeled on Los Angeles). I do enjoy Gladstone’s writing complexity. There’s a nice balance between descriptive prose and action, and the writing is satisfactorily sophisticated, a breath of fresh air in the fantasy field. His imagery surrounding the gods was vivid and concepts of using them even after death were disturbing and powerful. However, despite enjoying the writing, I’m not sure who I would recommend it to–my ultimate feeling is that this was a bit too big of a bite for one book or for Gladstone’s current level of writing, and could have been significantly stronger by limiting its scope. Still, I enjoy his writing enough that I’ll check out the next book.

avid reader and Goodreads reviewer looking for a home.
View all posts by thebookgator →
This entry was posted in Book reviews, Epic fantasy, fantasy and tagged fantasy, serie. Bookmark the permalink.