The Glass God by Kate Griffin. All bright and shiny! 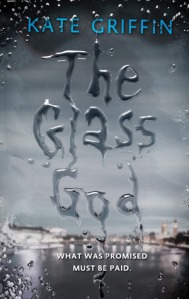 Absolutely perfect for a two-airplane flight–I noticed nothing but the book, making it a five-star read. But after all, that was an airplane, so I thought it deserved a more balanced impression, one not colored by the background noise of jet engines and willingness to suspend disbelief. You know what? Still satisfying.  It feels like Griffin has found the perfect vehicle for her voice; the well-intentioned, actualizing Sharon, shaman of the city and coordinator of a support group for magicals. Sharon, who “exuded the brightness of a firefly, the confidence of a double-decker bus, the optimism of a hedgehog and the tact of a small thermonuclear missile.” Sharon’s been seeking advice from self-help books, and doing her best to bring their approach into her life, but not everyone around her agrees:

“‘Don’t try your self-help crap on me!’ shrilled the goblin. ‘I’m the second greatest frickin’ shaman to ever walk the earth!’
‘Self-help would be you realising that you’ve got a problem with your social skills and trying to fix it,’ she sighed. ‘This is an intervention.’ In reply, Sammy kicked her shins again. ‘See,’ she went on wearily, barely noticing the pain. ‘That’s just so hostile.’“

Unfortunately, the current Midnight Mayor has gone missing. As the entity in charge of defending the city of London against magical destruction, it’s crucial he be returned to the position. That is, if he is really missing:

“‘Usually when he disappears it’s to blow things up, or engage in nefarious acts with dark forces, but this time there’s been none of that, and I’m a little concerned.’
‘You’re concerned that things aren’t blowing up?’
‘You have met him,’ Kelly pointed out.”
Until he returns, Sharon has been deputized, so any temporary inclinations she might have towards avoiding the responsibility are effectively thwarted.

Many of the group first introduced in Stray Souls make an appearance here, including Kevin, the germaphobe vampire, (““Sharon, then Rhys, seized the raised edge of the metal, while Kevin lurked behind them with a cry of, ‘So I’ll just, like, keep watch?’“), Greta the troll, Sally the banshee and Mr. Roding the necromancer. Several more ominous creatures are introduced, but Sharon tries to enlighten the Alders about monster discrimination:
“‘Amazing!’ said Kelly. ‘You know, I hadn’t even thought about it. Now that you point it out, the idea of having tea with a creature capable of rending me limb from limb had been something that bothered me. But now that I think about it, that’s just a social stereotype, isn’t it?’”

There’s shades of Douglas Adams in Griffin’s writing, the mocking social commentary that goes beyond party lines and makes fun of convention: “A potted plant in its reception area assured visitors that no matter how bleak, functional and cold this place might seem, they were, in fact, welcome guests in a dynamic environment.” Yet Griffin sneaks in the poetry of a city as well, in moments that just lead me to say, ‘Ah. Perfect.’ For instance, when Sharon is using her shaman skills to investigate:

“Every part of the city, every corner, was, she knew, infused with a kind of life. No necessarily sentient, not always something that would come out of the walls and secret places and tell her its secrets face to face, although that too, could happen… but a life which left its scars on the very stones and which, if you knew how to use it, could be a kind of magic.”

Overall, it kept me engrossed both times I read it. There’s a wide variety of characters that generally transcend social stereotype, particularly the urban fantasy kind of werewolves, witches and vampires. Including the group from Magicals Anonymous, the Alders, and various contacts they make while investigating, there’s a wide variety of people that help make the world feel populated with more than just one little power pocket of magicals.  While depth in these surrounding characters is somewhat sacrificed for Sharon’s growth, Griffin does give some complexity to the secondary characters. I particularly enjoyed the times Sharon strayed from her optimistic pep-rally, the kind of friend you like that much more after catching her cursing under her breath.

The plot is fast moving, and if the search for Swift is relatively straightforward, at least it doesn’t dally with exposition and portentous dialogue. Narrative is largely third-person and focused on Sharon, although it does slip into first person for a couple of brief sections, providing some insight into other characters. It works better than the prior book, which had the tendency to be somewhat staccato, even including characters were only plot points. I’m looking forward to the next book Griffin puts out, and hoping that Sharon puts in an appearance.