Servant of the Underworld by Aliette de Bodard 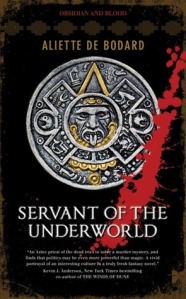 Recommended for fans of genre-bender fantasy

Looking for something besides medieval European-based fantasy? Too many werewolves just looking for love in your reading? Tired of airships and clockworks? (Note: I’m not even bringing up the zombie references, but yes, you can have too much of the walking dead). Aliette de Bodard’s trilogy Obsidian and Blood might just be the solution to the fantasy reader looking to genre-bend. The first book, Servant of the Underworld, is a fascinating stand-alone book, so don’t let commitment issues prevent you from reading.

Acatl-tzin, the High Priest of the Dead, is interrupted in the middle of a ceremony easing the passage to the Underworld for a dead noble. Ceyaxochitl, the second in command of the Mexica Empire, requests his presence at the scene of a crime. A priestess has gone missing from her chambers, and all that is left is copious amounts of blood and the odor of jaguar-magic. Although Ceyaxochitl would normally be in charge of the investigation, she has matters of the Empire preoccupying her at the moment, and besides–the chief suspect is Acatl’s estranged brother. Acatl’s relationship with the Underworld means he is particularly well-suited by both magical ability and forensic skills to investigate deaths. Unfortunately, attempting to clear his brother will mean Acatl will need to confront their mutual animosity. As the investigation grows more complicated, he’s forced to take on an aide, the cocky Teomitl, and even interrogate the gods. It seems the missing priestess is at the center of a great power struggle where almost everyone has a stake–except Acatl, who wants to avoid it. 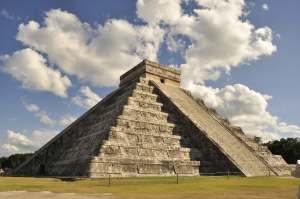 I can’t remember any fantasy that’s transported me more thoroughly to another Earth-time and Earth-culture. What is truly impressive, however, is that Bodard imbued the story with the feel of belief in the magics and the gods. I felt a empathetic connection. On her website Bodard states “See, I’m a writer–not a historian, not a researcher. I did my best with a mountain of sources, but I’m no expert and no Nahuatl, so it’s highly possible (and, indeed, highly probable) that the Obsidian and Blood books include some mistakes.” I don’t believe her–the world she created feels more authentic than most urban fantasies set in the here and now, and the fact that she actually shares further reference reading demonstrates more cultural respect than most. What is even more impressive is that she did it old-school science-fiction style, dropping the reader into a new world without narrative information-dumping. She admits to a few authorial cultural changes here and there, particularly shortening the incredibly multi-syllabic names, easing up on the human sacrifice and modifying the concept of dual gods, but it certainly isn’t anything but an expert would recognize. What I did note was the sense of place, the jungles and floating islands, the native foods, the elaborate dress. With her descriptions, I was reminded of ponderous stone statues at the Met, the steep stairs at Chichén Itzá, the rhythm of a Navajo chant.

There are a few shortcomings, none of much consequence. Occasionally a descriptive phrase or two for a character is repeated. Given Bodard’s thoroughness in outlining and detail, I’m guessing the repetition was intended as a person-clue as much as the names, which are occasionally similar. I expected to be uncomfortable with certain cultural aspects given prior knowledge about Aztec human sacrifice, but I was unprepared with the frequency of the ritual animal sacrifice. Eventually, though, Bodard helped me came to understand it, at least culturally. The ending, while satisfactory, is a bit too neat in some ways, as well as falling prey to a common fantasy trope. For some readers, the cultural immersion might feel too alien in a genre accustomed to wrapping 21st century beliefs in the trappings of whatever time period it chooses to play in (I’m talking to you, neo-Victorian steampunkers). Most significantly, Bodard does so well as the recreating a Meso-American culture from 1480 that it is a little challenging to empathize with the characters. Come to think of it, the way many sci-fi and fantasy writers get around the alien culture-empathy challenge is to give the reader a more modern human to identify with. So kudos, Bodard, for not including a time-traveler and challenging the reader to identify with Acatl.

This isn’t a book that will appeal to everyone. It isn’t a quick, breezy beach read–it requires some mental stretching and attention. This is the thick, homemade dark chocolate version of hot chocolate, not the instant Carnation version with little stale marshmallows. If that sounds appealing, I highly recommend it. I’m looking forward to the next book.

6 Responses to Servant of the Underworld by Aliette de Bodard