Inspector Hobbes and the Blood by Wilkie Martin.

Posted on August 6, 2014 by thebookgator 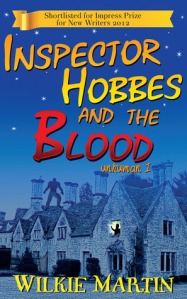 Don’t you have those days when your brain just needs a break? I’ve been swamped this summer by the seriously un-fun Understanding Pathophysiology. After reading four or five chapters a week, there’s times when my brain craves a bit of shut-off, but my body isn’t ready to sleep.  That’s what television is for, right? And sports? But honestly, I’d rather read about silly people and needless danger than watch it, and that’s where Martin’s Unhuman series with Inspector Hobbes fits in. Well, Inspector Hobbes isn’t senseless so much as Andy Caplet is, the diffident reporter assigned to follow Hobbes. Think Sherlock Holmes with slightly more bestial tendencies and Lou Costello as Watson. Think modern English town with supernatural beings just trying to live their lives without harassment, whether its chomping on old bones or standing in a field thinking trollish thoughts. Think–dare I say it–puns.

Andy Caplet is a struggling reporter unexpectedly assigned to follow Inspector Hobbes, one of the fearsome successes of the local police force. The assignment is surprising as Andy’s most notable story to date was his unsuccessful attempt to do a piece on a show-winning hamster, resulting in nasty bite and an unflattering bit of press. Hobbes is focused an unlikely series of events relating to Mr. Roman, whose house was burgled, a violin stolen, and Mr. Roman subsequently found dead, apparently a suicide. When Andy follows Hobbes to the cemetery where Mr. Roman was found, he discovers a newly-opened grave and is almost victim to a ghoulish cover-up. It is the beginning of Andy’s introduction to the unhumans around him, and he decides to stick with Hobbes in hopes of an award-winning story. Perhaps even a book!

The basic premise of Inspector Hobbes is done well. The unfortunate Andy contrasts nicely to the enigmatic, powerful and intelligent Hobbes. Plotting moves quickly from event to event, establishing interesting characters along the way. Particularly entertaining was Mrs. Goodfellow, Hobbes’ live-in cook, housekeeper and friend, with her dental obsession and her tendency to tread quietly. I appreciated the the way Martin hints to the reader and Andy that something about certain characters may not be quite human, a much more enjoyable type of character development than the long-winded info-dump. Hobbes, of course, is the biggest mystery of all–what is he, exactly? And does it matter?

“In truth, and in his own way, he’d looked after me. He was an enigma. He was a monster. He was a policeman. He was someone I out to be writing about.”

Andy, being more of the anti-hero type, frequently leaps to the wrong conclusion, misleading himself and the reader. Although bumbling, he isn’t quite incompetent, and is sincere, so I found him more tolerable than in the second book, Inspector Hobbes and the Curse.

One of the few problems I had with the writing was what appears to me as a tendency to run-on sentences and excessive commas. It could just be my personal fondness for semi-colons and colons showing, but I did find it initially distracting. I think as the action picks up, the commas diminish–or else my mental filter blotted them out. An early example:

“As I landed and turned around, the magazine fluttering to the carpet like a dying pigeon, the blood pounding through my skull, my shin bruised from a sharp encounter with the table, the old lady, standing by the sofa, gave me a gummy smile. Though I coulgh have sworn she did not have a single tooth left in her head, I thought a positive response was appropriate.”

As a side note, although I love paper books, this might be one to read on e-reader. Martin has a tendency to sprinkle a number of English idioms–and by English, I mean country-cultural specific words. And, speaking of abuse of the English language, there’s a story about Hobbes’ stuffed grizzly bear:

“The bus knocked him into a music shop, where his muzzle became entangled in an antique stringed instrument that suffocated him. And so my sad tale ends, with a bear-faced lyre.”

It was fun and entertaining–and didn’t mention molecular biology once. A perfect beach read, if you should be so lucky as to have time at the beach.

Thanks to Julia at The Witcherly Book Company for providing me a copy to review. Which was, of course, provided without a request to actually review it. Thanks!

1 Response to Inspector Hobbes and the Blood by Wilkie Martin.