Posted on September 6, 2014 by thebookgator 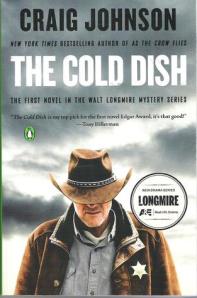 I knew in the first four pages that I was going to enjoy this book.

It begins with Sheriff Walt Longmire of Absaroka County, Wyoming, sitting in his office, watching the geese fly south. Ruby, dispatcher/receptionist, interrupts his musings to tell him he has a call from Bob Barnes,  who wants to report a dead body he discovered when he and his son went to collect their sheep.
“She leaned against the doorjamb and went to shorthand, ‘Bob Barnes, dead body, line one.’
I looked at the blinking red light on my desk and wondered vaguely if there was a way I could get out of this.
‘Did he sound drunk?’
‘I am not aware that I’ve ever heard him sound sober….‘

‘Hey Bob. What’s up?’
‘Hey, Walt. You ain’t gonna believe this shit…’ He didn’t sound particularly drunk, but Bob’s a professional, so you never can tell.”

He takes the report from Bob, verifies the information on the phone with Billy, Bob’s equally drunk son, and just as he’s about to hang up,

Walt tells Ruby “that if anybody else called about dead bodies, we had already filled the quota for a Friday and they should call back next week,” and heads to his car. He swings by the drive-through liquor store, and on his way out of town, passes by one of his deputies who is seriously irritated with traffic detail and delegates the job to her instead.

This is no ordinary sheriff, and this is no ordinary gunslinger book. Sheriff Walt has lived a hard fifty years, most of it in the immediate area, unless you count college in California and those years in Vietnam. His best friend is another Vietnam vet, a local Cheyenne Indian, Henry Standing Bear. Walt’s voice is dry, humorous, self-depreciating, and more than a little depressed.  He’s also more than a little obsessed with the rape of a Cheyenne girl, a case that has been bothering him for the last three years. Unlike the typical detective haunted by an unsolved case, Walt caught the guilty parties, but justice wasn’t handed out for a variety of social and political reasons. When the body Bob finds turns out to be one of the lead defendants, Walt suspects someone is out for revenge, possibly even Henry.

Like many mystery investigators, Walt is emotionally wounded, carrying grief from his wife’s death three years earlier.  Henry has had enough and believes its time to encourage–or kick–Walt out of his rut, and Walt finds personal motivation when a beautiful local woman, Vonnie, flirts with him. As much as it is a story about a murder, it is also a story about Walt and his friendship with Henry, as well as small town dynamics and the complex relationships that hold people together.

The characters feel human, and even brief appearances feel nicely developed. I enjoyed the acidic, opinionated Ruby, Walt’s two deputies, Vic and Turk, each going through their own challenges. The idiotic over-confident twins were enough to make Walt and me long to shoot them. The lingering sadness of the Cheyenne girl’s father, Lonnie, and his admittance of human frailty along with his laughable speech patterns made him one of the more moving characters. The prior sheriff, Lucian, comes out of retirement from assisted living to give Walt a hand, and while he adds some politically incorrect spice, he’s somewhat redeemed through his honesty and honor. I also appreciate that women appear in many different roles in this book, as friends, fellow professionals, love interests. It’s a nice change from the mysteries where women show up only as victim/love interest.

There’s nice moments of humor threaded through this book. Most of it comes from Walt’s dry law enforcement humor, the kind that is meant to keep the devils at bay more than mock others. He reflects at the death scene, where the dead body has been lying, examined and nibbled by a flock of sheep,

“Yea, verily, though I walk through the valley of the shadow of death, I will live forever. If I don’t, I sure as hell won’t become an unattended death in the state of Wyoming with sheep shit all over me.”

Then there’s Al, providing some much-needed comic relief for the reader–and for Walt–at a particularly tense moment:

“There was a halfhearted attempt at a Tiki theme with native paintings of naked women and carved wooden sculptures as decoration. The most amazing stacks of magazines and catalogs towered against the walls; National Geographic and American Rifleman made up the visible majority. It was like being in the dead letter office on Fiji.””

Writing is pleasantly sophisticated for the genre, and nice mix of dialogue and description. While Walt and Henry may make Lone Range references, they also reference Steinbeck, Shakespeare and even throw in a little French. For those who enjoy it, there’s also a fair bit of local history mixed in, particularly relating to General Custer and the Sharps gun. Most of the violence occurs off-scene, and is not particularly gory. Thriller elements come late in the story. There’s some semi-mystical elements that I found interesting, creating a strange parallel to my most recent read, Harbinger of the Storm, about a priest and his search for killers, both corporeal and supernatural. It cemented my feeling that this case was about Walt more than Melisaa; his need for resolution, his need to move on; his need for trustworthy friends. The spiritualism added moments of moving imagery to an already emotionally complex book.

I’m looking forward to checking out the next book and seeing where Walt is headed.

avid reader and Goodreads reviewer looking for a home.
View all posts by thebookgator →
This entry was posted in Book reviews, Mystery and tagged four star, mystery, series. Bookmark the permalink.

8 Responses to The Cold Dish by Craig Johnson. Yum.