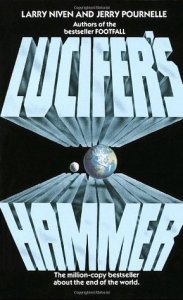 Good grief, reading hasn’t been such a chore since Professional Nursing Practice Foundations and Concepts. And in the fiction world, Jonathan Strange and Mr. Norrell. So perhaps you should take my review with a grain of salt, since plenty of people love Strange (unsurprisingly, no one admits to loving Practice Foundations). Niven and Pournelle start with a great idea, a since tried-and-true staple of the disaster genre–Earth facing an impending meteor pass. My first encounter with this phenomenon was Night of the Comet, a fabulous, campy film released in 1984 about two sisters who survive the Earth passing through the tail of a comet. My second-to-last encounter was The Last Policeman Trilogy by Ben H. Winters, a marvelous exploration of ethics and choice in the face of certain doom.  (Technically, of course, Hammer was my last encounter with the genre).  Hammer and Policeman represent two different approaches to disaster, one macro, one micro, and just guess which one I liked better. Of course, Hammer was released in 1977, and Policeman in 2012, so there is that little issue of societal norms shifting, but I didn’t let that stop me… honest.

Hammer takes a more societal approach, walking the reader through various characters’ lives, usually–but not always–related to the discovery of the Hammer-Brown comet. There’s the rich, eccentric discoverer of the comet, a documentary film maker, a senator, his daughter, a preacher, a secretary, a power plant executive, a stalker, the leader of a burglary ring, a mail carrier, various astronauts-in-training (of all of these, there are two black men, two white women and one Russian woman represented, and just guess who the secretary and the burglar represent)… I discovered there was a good reason for a list of characters at the beginning of the book. I needed it to know who I was supposed to pay attention to, because so many people were introduced for only four pages. Oh, and how can I forget the perspective of the comet that closed out so many of the chapters? When it is clear the asteroid will come closer than expected, money is wrangled to get a team of astronauts up into space to take samples, pictures and measurements, and I was surprised to find this was one of the most interesting sections for me.

For over a third of the book–and that’s a rather thick third, mind you–we’re treated to Waiting for Godot, Asteroid Edition. I ended up literally reading about ten pages a day–and finishing another series, a NetGalley book, a mystery, a UF re-read, and Quammen’s epic on zoonotic diseases in the meantime. Once the asteroid impacts, we get disaster scenes from even more characters, some of whom don’t live through it. Certainly, the various scenarios seemed well-reasoned both in the science sense (impact earthquakes, tsunamis, cloud cover) and the political sense (protecting the defense system, attacking other countries).  The story starts to develop momentum as people are escaping the L.A. Basin and seeking safety in the midst of panic. It’s one of the most action-oriented sections, somewhat compromised by allowing one of the major narrators to go into an existential funk and his storyline to be taken over by a new character.

And that, I discovered, was the most significant problem with the story. Although using the perspective of many allows for the reader to understand the largeness of the scope of disaster, it makes emotional connection with any one character almost impossible. In Policeman, narration is provided first person,  and although many of the projected responses to impact are exactly the same in both books, experiencing it through one man’s journey is far more profound and moving.

The last third of the story is the survival aspect, and lives of many of the characters start to intersect. The experiential timeline is compressed, and within a relatively short amount of time, a section of the population is reduced to cannibalism. How short? Well, one man’s personal supply of insulin hadn’t gotten low yet. For all Hammer‘s attempts at realism, that seemed a pretty profound psychological hurdle to overcome in a few weeks or months. Still, I was game; I’m a sucker for a good survivalist story.

It satisfied until the last few chapters, which centered on one of those philosophical debates about moving civilization forward or huddling by our fires in caves. I remained unmoved; the last book of The Policeman trilogy achieved a level of profoundness that made this discussion feel like a sixth-graders’ debate (no offense to any sixth-graders who might be reading this). Satisfying ending and all that, but I have the feeling I’ll forget the details in a few weeks.

This was a one-star beginning, four star middle, and two-and-half star end. Given all that, I’d say read this if you enjoyed Stirling’s apocalypse series (Emberverse), or perhaps The Stand, but don’t expect too much in terms of emotional engagement or character development. For those, I’d head over to the more modern interpretation of asteroid strikes in The Last Policeman Trilogy and be prepared for all the feels.

avid reader and Goodreads reviewer looking for a home.
View all posts by thebookgator →
This entry was posted in Book reviews, Science fiction and tagged end of the world as we know it, Hugo /nom, sci-fi. Bookmark the permalink.