The End Has Come. Or more precisely, A New Beginning. 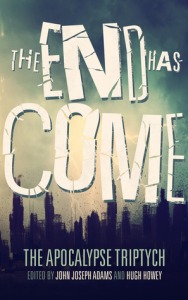 Read July 2015
Recommended for fans of a new world

Let’s be clear: the title “The End Has Come” implies that the stories center upon the events as the apocalypse is upon us. Little did I know when I bought it that per publisher, “The End Has Come is about what will arrive from the ashes.” 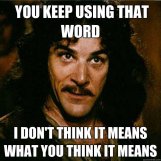 Nevertheless, once I dealt with grief caused by unmet expectations of disease, destruction and horror, I enjoyed this collection.

Though I have a fascination with The End of the World (as we know it), I tend to avoid thematic collections of short stories. Too much like a box of chocolates, and, man–do I ever hate the coconut ones disguised as vanilla creme. But the contributing authors have more than the average share of credibility:  Hugh Howey (Wool), Seanan McGuire (Incryptid series), Ken Liu (a million short story award noms), Carrie Vaughn (former classmate), Mira Grant (Newsfeed series), Jonathan Maberry (one of the best zombie series I’ve read), Nancy Kress (I’ve always meant to read her),  Elizabeth Bear (loved “Bone and Jewel Creatures”), Ben H. Winters (The Last Policeman triology), and others.

There’s great stuff here with interesting worlds and stories. Maberry’s contribution is a short related to the Rot&Ruin world (finally, zombies!) that was a bit more of socio-political bent, and Howey did a short related to two people who wake up alone in a silo in the world of Wool. I actually liked that less, as I got stuck on the biology in his scenario. Honestly, I didn’t care for plot of Arkenberg’s “Like All Beautiful Places.” Set in a carrier ship off lovely San Francisco, it was a well written attempt to recapture the past, but I enjoyed the prose: “A sky that seemed too big for itself, too solid blue for too many miles, almost threatening to collapse.” Lagan’s “Prototype” was captivating and eerie, centering on a scientist working in isolation to improve the protective suits people need to wear: “What he lacks in social graces he makes up for in creepiness. Most of us add a little personality to our suits… He looks like a six-foot-tall, man-shaped oil slick.” Her sense of humor amused me, and I think she’d be an author I’d enjoy: “I laugh, and decide I’ll spend the rest of the trip needling him. At least one of us will be entertained.”

Sander’s “The Last Movie Ever Made” envisions a post-apocalypse deaf population, but one still deep in the movie craze: “Some of the film geeks wanted us to make a movie about the fact that everyone was deaf, but that seemed like the opposite of escapism to me–which I guess would be trapism, or maybe claustrophilia.” In fact, Sanders is a very interesting writer, and while I wouldn’t say that I loved the story, she got the bulk of my text highlights: “This not-talking thing meant you really had to watch people, and maybe you could see people more clearly when you couldn’t hear them.” I’ll definitely keep an eye out for her. Bear’s “Margin of Survival” was extremely satisfying: a young woman seeking to provide food for her weaker sister by sneaking into an enclave. It had a horror twist at the end that I didn’t particularly enjoy–it smacked of gimmick–but was well-told and interesting world-building.

Grant’s short is set in Disneyland, and the efforts of a marketing specialist to maintain the Disney spirit. It worked well for Grant’s writing, but again, an idiot end twist. Seanan McGuire’s “Resistance” is the one that really hit home–it was a character piece about an OCD scientist set in a world that was covered with a fungus. Brilliant and powerful–that woman does good people. Wellingtons’ “Agent Neutralized” was a bureaucratic Mad-Max type piece. I enjoyed his writing and wouldn’t mind spending some time in the world he created. Likewise Bellet’s “Goodnight Earth,” which reminded me of a cross between Paolo Bacigalupi and the tv series “Dark Angel” as a couple take an unusual family on their boat up the Missip. Another book I’d read. Kerr’s “The Gray Sunrise” is story about a man who has sacrificed much of his life for his dream sailboat, which becomes an escape for him and his son. I liked the ornery independence of an older woman in Due’s “Carriers,” and wouldn’t mind seeing more from her as well.

There were a few misses. Winter’s “Heaven Come Down” didn’t gel; it was an infirm parallel to the re-creation of the world coupled with aliens. I ended up skipping Wasserman’s “In the Valley of the Shadow of the Promised Land” because I couldn’t cope with the Old Testament/religion parallels, and while I like Liu, I found “The Gods Have Not Died in Vain” initial <chat text> format off-putting, the A.I. kind of <yawn> and was never able to really immerse in the story. Avellone’s “Acts of Creation” is a woman interviewing a person (?) in detention and feels like it needs more context. I did like Shallcross’ quilted/story idea; comparing pieces in a patchwork quilt to the scene featuring that material, but it was a little jumpy. Still, a sweet story about preparing for the apocalypse.

Overall, an extremely satisfying collection. I’ll say this for it–there’s weren’t any stinkers, just ones that worked less for my taste. Since The End Has Come is the last collection in a three-volume “triptych,” it appears I’ll be heading back to catch the other two collections. The Introduction notes that some of these stories are capstones to stories in the first two. Honestly, they stood well on their own, but now I’m interested to read more.

Even with the lack of zombies.

avid reader and Goodreads reviewer looking for a home.
View all posts by thebookgator →
This entry was posted in Apocalypse & dystopia, Book reviews and tagged end of the world as we know it, four star, series, short stories. Bookmark the permalink.

4 Responses to The End Has Come. Or more precisely, A New Beginning.