Johannes Cabal and the Blustery Day by Jonathan L. Howard. No relation to the other Blustery Day. 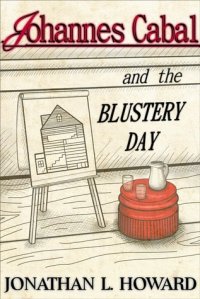 I couldn’t resist this imagery of this title, particularly after Melora reviewed it. When I began writing this review, I realized why.

Unlike Pooh, Mr. Cabal is warned that the Bonewind is coming for him. While it sounds obviously ominous, he doesn’t recognize the name.

“Marvelous. If he’d really wanted little voices whispering gibberish in his ear, he would have invested in a radio license.”

Poor Mr. Cabal–he’s coming off a three day bender in the laboratory and really just wants to sleep. And clearly, he’s never met the AI in Aurora or aliens in Embassytown:

“Even then he had no guarantee that it was a wind in any real sense at all–it might only be figurative. Metaphors irritated Cabal beyond reason; why couldn’t people just say what they meant?”

Cabal’s voice is full of dry wit, a type of humor that I happened to find amusing:

“First came a lengthy introduction… riddled with the grammar of those who are prepared to do anything.”

You know–because Evil doesn’t do punctuation.

Howard explains in the Afterword that this was the first Cabal published. It’s also the first I’ve read, so I’m not sure if it is consistent with the rest in the world-building. I did enjoy it a great deal, with my only complaint being a quick mention of television that seemed inconsistent with the 1900s feel of lightbulbs, a coal chute and steam heating.

This was a fast little read that deftly distracted me during my return to the exercise bike at the gym. I even laughed out loud, hopefully not frightening my co-exercisers away. If you are amused by the (mis) adventures of an over-confident but witty scientist, I suggest you check this out.