Ok, maybe not. It appears my prior reviews of this series are rather weak. Here’s why you should read The Kitty Jay series.

If you haven’t followed the tales of the Kitty Jay, a mercenary–okay, freebooter–zepplin, it’s best not to start here. Most likely, you’ll understand it, but it is the capstone to a four-book series, and Wooding has done some nice things in this one, wrapping up both personal and political arcs. There’s also some baseline world-building that isn’t much explained, largely because it was done earlier in the series.

I hadn’t seen Firefly when I started this series, and honestly, all the reviews that mentioned it were lost on me. Now that I’ve seen the show, I understand–comparisons are unavoidable. We have a classic troupe of misfits with challenged pasts, a steampunk setting with flying airships and revolvers, and a frontier mentality. There’s a lot of humor, and a fair amount of daring and violence not exactly of their own making.

There’s an attractive, roguish captain with a flexible sense of ethics, a flier who is enthusiastic with violence but incredibly dumb, a talented but shy pilot, a conflicted doctor, a conscience-ridden aristocrat on the run, a socially challenged mechanic and a loyal but somewhat passive first mate. There’s even a petite but seriously socially challenged kick-ass woman.

Bonus: one irritable alley-cat and a metal golem.

But Wooding goes deeper than Firefly was ever allowed by delving into the characters’ inner lives and their dysfunctional family. This is not a charming crew of lovable rogues–these crew members are seriously flawed. However, at this point in the series, they’ve each grown enough to start thinking about life beyond mere survival.

But, an interplanetary war has a way of intruding and making survival an issue.

Take those interpersonal dynamics and plunk them into an evolving war, ancient artifacts, and daemonologists and you have a read that kept me on the edge of my seat. 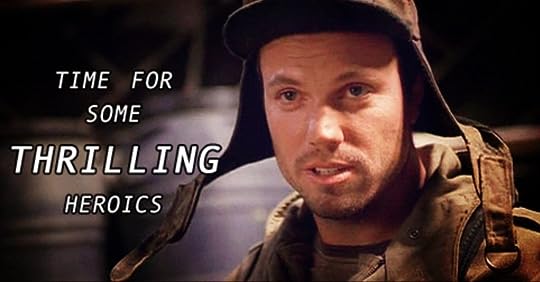 If character, world-building and plot are where it’s at for you, I highly recommend this series. I’m adding it to my own library.

avid reader and Goodreads reviewer looking for a home.
View all posts by thebookgator →
This entry was posted in Book reviews, fantasy and tagged fantasy, five star. Bookmark the permalink.

8 Responses to Ace of Skulls by Chris Wooding. Absolutely Aces.