A Plain-Dealing Villain by Craig Schaefer 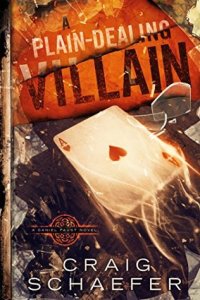 Sometimes after swim team, my lane mates and I go to a local pub and have a drink. Since we just spent an hour and a half swimming, it means salty snacks to go with the drink. Then we usually order All the Appetizers, which once included chili-oil beer battered fries, homemade chips with chunks of bacon, onion and blue cheese on top, Wisconsin deep-fried cheese curds and a giant soft baked pretzel with three kinds of mustard. Oh, an another drink, to wash down the salt. And by the time I’m back in my house, I’m wondering what on earth I was thinking, eating so much late at night? But you know I’ll just do it again.

Ditto for A Plain-Dealing Villain.

At any rate, the story:

“When Harmony Black and her task force came to town, my girlfriend promised she’d find the best lawyer around. That was Perkins. He was so slick he didn’t have fingerprints–literally.” It’s decided to be in Faust’s best interest to lie low, so he takes an out of town job, though the audition is quite the almost-killer. After almost-sidetracking in the airport, he ends up with a team in Chicago, quite the contrast to home. “Vegas would steal every penny in your pocket, but it’d make sure you had a great time on your way to the gutter. Chicago didn’t have time to play games. It was a machine for printing money, moving at the speed of industry, and it only offered two choices: keep up or be left behind.”

Faust needs to steal an artifact from a suspiciously connected jeweler, and the theft in turn leads to a card tournament at the Bast Club. I enjoyed every scene there, particularly the scene-stealing Fredrika the fashion designer. “This is the Cool Kids’ Table. I am the Queen of the Cool Kids and I hereby use my magic chalice of office to banish you into the hinterlands of boredom.’ Freddie waved her martini glass at him. ‘Go suck somewhere else.'”

It’s a zero sum game, of course. All the elements I enjoy are here: the rich city description, a fast-moving action, nice characterization and the feeling Schaefer has the one up the sleeve. Faust continues to work as part of a team, which I appreciate, as I’m awfully tired of the solo hero working against the odds. The somewhat sarcastic voice remains. The demons are even more devilish and sadistic, for those who feel like Hell hasn’t been doing a good job representing. The ending, however, left me more than a bit uncomfortable. Was that really a good idea?

“All the danger, none of the reward. Or as I like to call it, Tuesday.”

But, you know. Only until next time.

avid reader and Goodreads reviewer looking for a home.
View all posts by thebookgator →
This entry was posted in Book reviews and tagged caper/heist, four star, series, urban fantasy. Bookmark the permalink.

4 Responses to A Plain-Dealing Villain by Craig Schaefer