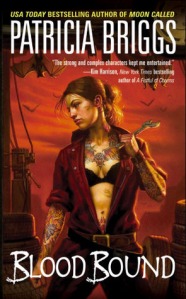 The second book in the Mercy installment centers upon the vampires. Stefen, good friend and Scooby-lovin, t-shirt wearing vamp, calls in a favor. Favors among the supernatural are always tricky. When Mercy goes with him to a hotel to meet a suspicious new vampire, they both get more than they bargained for. Yucky stuff follows, but Stefen has a different memory of the horror in the hotel. Mercy must share her memory with the vampire seethe so that the queen Marsilia does not kill Stefen for bringing unwelcome attention to the vampires.From there, Mercy is kicked out of the action while the menfolk look for the crazy vampire, until the queen vampire contacts Mercy and lends her Andre to help look as well.

I’m really not a horror reader. Ever since Pet Sematary when I was thirteen, I’ve stayed far away from the genre, only coming close when urban fantasy flirted with things that go bump in the night. Oh, and Sherri Tepper, who does the science fiction version of the creepy dark side of humanity. At any rate, this opens with Mercy trapped as a psychotic vampire kills someone in front of her and hardly lets up. Well, I say ‘hardly lets up’ because I felt like there was a lot of description about eating bloody people as well as general descriptions of blood, torture and killing. But perhaps Briggs needed the horror to keep readers awake, because in between events there is an unbelievable amount of info-dumping. In a side plot, a reporter hounds Mercy, and she ends up giving him a lecture and a half about werewolves, while in the main storyline, Mercy and the reader learn almost everything there is to know about vampire politics, vampire skills, sorcerers and demons.

Characterization continues to be one of Briggs’ stronger skills. Plotting has interesting stops along the way, although the overall arc is almost identical to the first book. The editors must not have expected readers to have read book one, as much of chapters one through three review Mercy’s identity, her history with Samuel and her recent history with Adam. The crazy vampire bites Mercy, which is an unpleasant bit of rape-foreshadowing. Once again, the book virtually fails the Bechdel test, with the exception of a brief conversation with Honey the werewolf and a grade-school girl who gives her a clue. Even Mercy’s talks with an elderly female ghost is about men. It also introduces the idea that Stefen might also have an unusual affection for Mercy, competing with both Adam and Samuel for her attention. Apparently, I was wrong–to know Mercy is to love her. It is also becoming clear that while Mercy may be shuffled to the side by the wolves, she will usually be put into a position where she is ‘forced’ to circumvent them or to go off on her own. In this case, the crazy vampire was so strong, he “brought out the wolf” in everyone. This will become a theme through the series.

This one does not hold up as well on re-read, for both personal and critical reasons. It was the book that had me considering giving up on the series, and if I wasn’t such a completist, I probably wouldn’t even have it on my shelves. Two stars and a half stars, rounding down for both the info-dumping and lukewarm gurrl-power message.