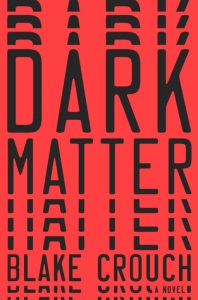 “No one tells you it’s all about to change, to be taken away. There’s no proximity alert, no indication that you’re standing on the precipice. And maybe that’s what makes tragedy so tragic. Not just what happens, but how it happens: a sucker punch that comes at you out of nowhere, when you’re least expecting it. No time to flinch or brace.”

After a decade in emergency medical services and another fourteen years in oncology, I can say that this is absolutely true. True, true, true. But what is also tragic is the slow dissolution of options, until world, circumstance, personality, this moment, feel like they limit options until the only thing left is the least objectionable, the least ethically compromised in a sea of no options, the final moment before the illusion of control and choice breaks. Though Dark Matter opens with the former, it sticks with the illusion of choice.

I went into Dark Matter knowing nothing except there was buzz, it was sci-fi, and there was something that ***COULD BE SPOILED.*** It was a big deal in many reviews, whether or not something was mentioned. And that, perhaps, best demonstrates just how limited this story is, that people consider the application of the multi-verse of possibilities a spoiler. I love much in science fiction. I love the way it makes my brain stretch. Sometimes, I love the way it makes me uncomfortable (hello, Octavia Butler!). One of my paragons is Ursula LeGuin, the was she weaves world-building, character and idea together to really explore humanity. To think that one could spoil The Left Hand of Darkness by saying, ‘the aliens change sex’ completely minimizes the intricacy of ideas, the impact of religion, the building of a society, the turmoil of the characters. I’m not being critical of the idea of spoilers so much as the idea that this sci-fi book contains so little that ‘spoiling’ is possible. It’s a Big Idea in need of more work.

So here are my issues, with spoilers. It’s a screenplay. Simply structured, simply written, it is the rat-a-tat-tat of stream of consciousness under duress. Eventually, I found it inadequate to sustain my interest, and generally inadequate to convey the ideas the author wished to explore. Largely as a consequence, the main character, Jason Desson, remained largely unbelievable to me. I did not feel like he was a researcher, an academic or a professor. I felt like he was an ordinary dude that loved his family a lot, but there was no real belief created for me between the ‘genius-level’ guy that could create this machine and the guy that contained that brain and taught at community college. Had we tapped into Jason’s problem-solving ability sooner, I might have believed they were the same person. But because of the character inadequacies, we get to relax into the idea that the opposition is someone who is quite different than Jason. It makes the set-up that much harder to appreciate. Jason becomes so one-note with his characterization–“Daniela! Daniela!–two notes if you count his son, Charlie–that really instead of becoming sympathetic, he just sounds obsessive. Scary obsessive, by the end. Crouch does explore this idea just a touch at the end with the Jasons that are willing to kill, but ends up ignoring it for a moment of Dani self-determination.

Instead of exploring the truly horrific idea of a number of closely similar but just different enough worlds, Crouch gets distracted by the meta-changes. When Jason is searching for new worlds, he finds an arctic age, one where wolves are in Chicago, where buildings are on fire, the plague, etc. I enjoyed these visions of other worlds, but realized it was a physical sideshow to the fear of the mundane. We later blame some of it on the Box interpreting his state of mind, but I think a more interesting story was where Jason eventually ended: realities that were almost but not quite like his.

How can you recapture exactly the point where your life diverged? (Okay, now that I’m thinking about it, how did Jason end up in Jason2’s world when he was unconscious and freaked out?). This dissonance is explored lightly as Jason frazzles to an obsessive, psychotic state. Here is where I missed the scientist as well, the logician and the puzzle-solver. How many times can you dial the same phone number before you start thinking of other ways to check it out? Honestly, does Crouch know any people in hard science? Crouch wants to have both worlds, the ‘normal’ guy and the genius guy, and doesn’t make me believe they are the same core person. Take away the premise and they are two different people in conflict over a woman, a much less interesting story (also not clear why science-Jason didn’t try and romance adult Dani–there could have been an interesting story there).

Overall, a decent, quick read, but not one that provided a lot of meat to chew on; too single note, too under-written with unsympathetic characters. I’m sure the movie will be a big hit, especially if they get Matt Damon.

avid reader and Goodreads reviewer looking for a home.
View all posts by thebookgator →
This entry was posted in Book reviews and tagged meh, sci-fi. Bookmark the permalink.