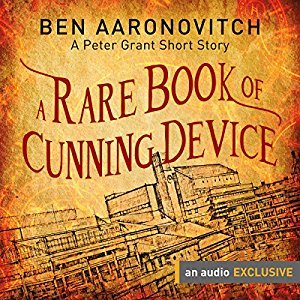 aka “Ben’s Ode to Librarians and Their Charges,” free at Audible.

A wonderful introduction to both Peter Grant and the wonders of Kobna Holdbrook-Smith’s voice acting. It’s a quick story, quite possibly short on world-building background for those new to the series, but does have a nice little bit about Peter’s family. In it, Peter is asked by librarian Elizabeth Winn-Stanley (aka “Hatbox” Stanley) to investigate a poltergeist in the King’s Collection at the British Library. The Folly’s own librarian, Professor Harold Postmartin (aka “Harold the Pirate”) becomes involved as well. I do so enjoy Kobna’s ponderous, resonant rendition that also captures his mischievous humor.

The British Library gets two copies of all books published in England and Ireland.

Number of Scooby-Doo references: One

“I like to learn from the mistakes of fictional characters.”