Etched in Bone by Anne Bishop 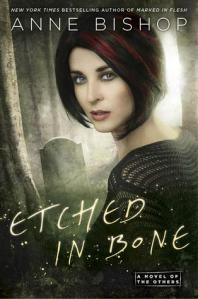 Read May 2017
Recommended for completionists

Apparently, some times I’m a little subtle, and the trolls have difficulty following my train of thought. So I’ll be direct: I feel kind of sick about reading this book. I mean, the whole series has been one long sugar high, but this is like the regret after eating a thousand calories beyond reasonable, or the vaguely ill feeling when my bloodstream has more sugar than red blood cells.

But I confess: I started reading and didn’t stop until the last page. There’s something in Bishop’s writing that carries one along; granted, I was post-night shift, so my brain was a little sleep-deprived, fuzzy, and in need of distraction. And sure, I might have spaced out a little when the plot became ‘manly-man protect special woman,’ and ‘manly-mens protect other womans,’ but that’s just letting myself be carried along with the enjoyment of the moment, right? Chocolatey goodness melting in the mouth (not the hands). It’s only later one thinks, ‘wait, what did I just do?’

So I have to admit, Etched in Bone is probably enjoyable in distraction-eating kind of way. This might be the day for confessions, because I have another one–I suspect half the enjoyment of this series comes from revenge fantasies. In every book, the bad guys–who are truly selfish, greedy, without empathy and such horrible people that absolutely no one will find them sympathetic–will meet an ugly end. The last book gave us virtually world-wide destruction of racist governments and subsequent reassertion of the ‘natural’ world. In this one, however, even the revenge feels old, as Bishop recycles the tired plotting of Written in Red (book one) while attempting to regain the threat of world-wide destruction that drove books three and four.

However, Bishop couldn’t really be bothered to deal with more character creation, so she resurrected least three or four of the villainous personalities to provide some of the meat for this book. Ha-ha: that’s a pun for those in the know. Speaking of meat, in this book, Girly-Girl decides she has an Issue about eating meat, because she’s troubled by images about it. Me too, Girly; me too. But I’m not not-dating a top-level predator whose Manly-Man friends tease him about bringing spinach to a potluck. You should probably figure that shit out.

Damn, did I mention how gross this books make me feel? It’s like Sexism 101, all wrapped up in a sexy werewolf bow to make girly-girls kind of enjoy it.

Will you like it? Idk, I guess it depends on how altered your level of consciousness is at the moment, and how you want to feel when it’s all over. As a modern feminist, I felt more than a little dirty being wrapped in the Super-Chivalry of Bishop’s world (ooh, a woman wants to be a cop! Shocking! Let’s let her try after she’s vetted by all the Mens), where women write pen pals and have pizza parties, and the men work out on bicycles and go around having meetings Deciding Things. As a modern person, I also felt kind of dirty with the elderly black woman (only one older person in the community) being A Force to Reckon With as well as the Mother-Figure for all the new community members, and her daughter being the Weak and Easily Manipulated by Men character. The rest of the community of wives are white, normal and pretty homogeneous. There’s no way about it: this series is seriously sexist, and only reinforces ethnic stereotypes in any attempts to be inclusive.

Then there’s the writing: the villain is completely ridiculous, a caricature of selfishness, sexism and manipulation, and is accompanied by equivalently ridiculous henchmen. As a further kick in the funny parts for those who are looking for Hawt Schmexy Times, the ending will almost certainly piss off those hoping for a particular romantic angle. Honestly, I thought the ending was the one consistent note through the series, but then, almost everything here was recycled, and Hawt times would have required some new material.

Overall, I read, finished and felt gross about doing both. Your mileage may vary.

avid reader and Goodreads reviewer looking for a home.
View all posts by thebookgator →
This entry was posted in Book reviews, fantasy, Urban fantasy and tagged series, urban fantasy, yuck. Bookmark the permalink.

2 Responses to Etched in Bone by Anne Bishop