Posted on August 2, 2017 by thebookgator 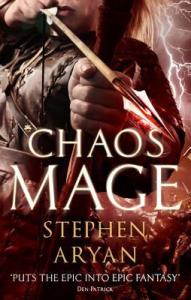 Wow, what a stroke of luck! The rather crabby clerk at Half-Price Books wanted me to know it’d be half an hour before they’d make me an offer on my books. No worries–I can think of about a hundred things more difficult than spending thirty minutes in a bookstore. So instead of my usual quick scan, I actually looked quite thoroughly at all the books on the trade and hardcover sci-fi shelves. And wow, would you believe how many of my mediocre reads were there? (Apparently I wasn’t the only one unimpressed). I was shocked to see Chasing Embers, and almost bought it just so I could howl with laughter all over again. But I digress.

I found this and tempted by ‘chaos’ to read a few pages. Two women were standing guard on a wall, defending their motley group against the Forsaken, hollowed-out  former friends who had been carried away during the fighting. A few more pages and there was a Guardian woman given an assignment to escort a battlemage to the beleaguered city. Excellent: mages, zombies and women as many of the main characters. I thought I’d spend my ill-gained proceeds from Altered Carbon, American Gods, Charmed by Shadow, and Joy School on this baby, and I have to say, what a prize.

It’s kind of old school epic fantasy, writ modern, reminding me of Witch World. Andre Norton had some kind of hollowed, characterless grey men, and I suddenly realized a number of classic authors had flirted with zombie mythology in fantasy land. Although I didn’t know it at the time, it’s the conclusion of a trilogy, but from what I can tell, it doesn’t matter too much in terms of a single overarching story. It takes place in a distant, isolated city of artisans, Voechenka. It is under siege from the undead, and reports are finally starting to reach those who have enough power to act.

The two women standing guard are Zannah, a non-human and member of the prior conquering race, and her friend, Alyssa. They’ve been rallying survivors to defend their safehouse, a winery (isn’t everyone’s?), from the Forsaken and the mercenaries. Farther away, Tammy the Guardian (easily the worst thing about this book was her incongruous name) is escorting Balfruss the Battlemage to the city of Voechenka. Her superior wants her to investigate, and the mage has tasked himself with discovering the teacher for the evil sorcerers who have been responsible for starting a war.

Once all the characters got into place, action was non-stop. There were a number of issues to sort out, so every one has a part to play. While I expected certain things to play out certain ways, I really enjoyed the ride getting there.

Characters are really well done. I think most are newer to the story, so we get more information about Zannah, a member of a race of non-humans, and Alyssa, her friend. The battlemage and the warrior also get some development. And you know what else? There’s a lot of women in this story. Amazing fighters. Leaders. Spiritual guides. Antagonists. Magic wielders. You know–they’re just people, playing a role that isn’t just virgin or whore. Give this a try if you like the blood and guts of Mark Lawrence or Brent Weeks but would like less sexism. Or if you sort of liked The Black Company by Glen Cooks, but wanted more detail and characterization.

Although I didn’t get too much sense of the larger world, I enjoyed the sense of the city, past and present, and felt like there was a good sense of danger. I recommend this to fans of epic fantasy. I suppose I’ll have to search out the first two books, but I’m a little afraid they won’t live up to this one.