It was somewhat with surprise that I found myself enjoying the first two Lumberjanes graphic novels, as it’s not a form I’m drawn to (ha-ha) normally. Unfortunately, the third novel stumbles in both artwork and story, and my love affair seems to be settling into a low flame. Originally conceived in terms of the arc completed in Volumes 1 and 2, Volume 3 had to reinvent itself, choosing to take us back to the individual girls. There wasn’t a great deal of character depth in the first two volumes, which focused more on teamwork and a plot at breakneck pace.

The beginning of the volume centers around the time-honored tradition, campfire stories. With each storyteller, the artist also changes, somewhat suiting the style of the teller. In the second half of the edition, the group splits in two, with Mal and Molly off to enjoy a possibly romantic picnic, and Jo, April and Riley off to earn badges.

Characterization is where it both shines and fails for me. As storytellers, the reader gets a insight into each girl’s style. In the breakout, we get more depth on Mal and Molly. Back in camp, we learn more about April, which turned out to be confusing in context of earlier build. I perceived her as a natural, calm, enthusiastically positive team leader (pointing out others’ skills) and in this one she becomes almost scarily obsessed with getting a badge. Her friends go along in support, but with less enthusiasm. 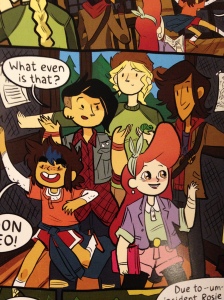 Contrast: Lumberjanes: Friendship to the Max! A calm leader, as well as the only one with eyeballs.

But my biggest issue with the volume is the artwork. Once the storytelling and guest artists finish, the art is taken over by Brittney Williams. There’s a notable infantilization of the figures. Big eyes, simplistic lines, rounded edges, lighter colors; I started to feel a little more manga-like rather than the more edgy and complex visual depth from earlier issues. 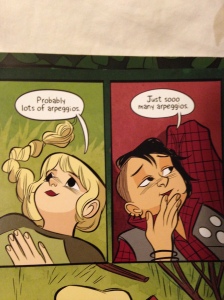 The camp director, a riff on Rosie the Riveter, is particularly, unfortunately, softened. 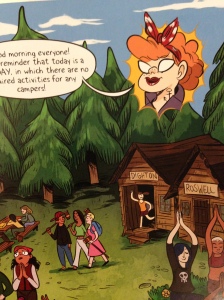 The first two collections are billed as ‘all-ages’ graphic novels. but this one really felt targeted to a younger set. However, I guess artistic changeover is a common facet of comics, and perhaps also of graphic novels. Which–allow me to get my grump on–only further solidifies my perception that they are very far removed from the storytelling form of a short story or novel. So here’s hoping for further change toward an all-ages look. I’ll continue the series, but without the same degree of enthusiasm.

avid reader and Goodreads reviewer looking for a home.
View all posts by thebookgator →
This entry was posted in Book reviews, Urban fantasy and tagged comic/graphic, female lead. Bookmark the permalink.