The Saturn Game by Poul Anderson 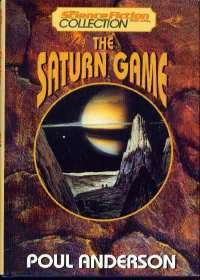 Winner of both a Nebula and a Hugo, The Saturn Game tempted me by being a mix of both fantasy and sci-fi. I’ve had some success with Poul Anderson when younger. Alas, The Saturn Game did not connect; although written very well, it felt dated and failed to ignite my interest.

“There was no describing it, not really. You could speak of lower slopes and palisades above, to a mean height of perhaps a hundred meters, with spires towering farther still. You could speak of gracefully curved tiers going up those braes, of lacy parapets and fluted crags and arched openings to caves filled with wonders, of mysterious blues in the depths and greens where light streamed through translucencies, of gem-sparkle across whiteness where radiance and shadow wove mandalas–and none of it would convey anything more than Scobie’s earlier, altogether inadequate comparison to the Grand Canyon.”

Anderson, although not as well-known as his cohorts, was one of the greats of the sci-fi Golden Age. The premise here is that an exploration ship, followed more slowly by a colony ship, is nearing the end of its journey. The highly competent crew has needed distraction during eight years of space travel, particularly with television systems only allowed three hours of the day (funny commentary from 1981!). A group of people has found escape through a ‘psycho-drama,’ which sounds a great deal like a more verbal, less board oriented, Dungeons and Dragons. When the crew at last approaches Saturn’s glacier-covered moon, they begin to have a hard time separating reality from fantasy.

Narratively, it’s third person omniscient, with each section beginning with a pseudo-lecture about the mental hazards of prolonged travel. I don’t know if Anderson was the first to use the device, but it has been replicated many times since. When three of the crew members slip into fantasy, the text shifts to italics, and as they become more confused about their reality, the shift is more and more frequent.

“‘I stay far aloft,’ Kendrick says. ‘Save he use a scrying stone, the Elf King will not be aware this beast has a rider. From here I’ll spy out city and castle.’ And then–? He knows not. He knows simply that he must set her free or die in the quest. How long will it take him, how many more nights will she lie in the King’s embrace?

‘I thought you were supposed to spy out Iapetus,’ Mark Danzig interrupted.

His dry tone startled the three others into alertness.

Jean Broberg flushed with embarrassment, Colin Scobie with irritation; Luis Garcilaso shrugged, grinned, and turned his gaze to the pilot console before which he sat harnessed. For a moment silence filled the cabin, and shadows, and radiance from the universe.”

Between the vivid description of the snows and scientific discussion of the strata, there’s meaty imagery. However, the pedestrian nature of the fantasy–essentially a knight, a sorcerer, and a noble lady, the ol’Camelot type trope–just lacks interest. The fantasy lacks the insidiousness of Gilman’s The Yellow Wallpaper, making it hard to immerse myself along with the crew. What I mostly felt was annoyance by their foolishness as they explore the ice equivalent of the Grand Canyon, and at their companion’s relentless nagging as he waits on the ship. The psychology of it didn’t fit for me, that after eight years together, the interactions would fall out the way they did.

It isn’t a bad story, or ill-done by any means. It just didn’t strike that chord for me.