The Pale Horse by Agatha Christie 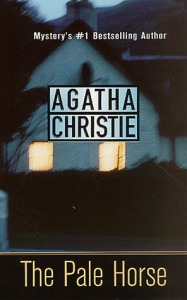 Imagine: a Christie I hadn’t read. Ever. But I’ve re-read enough Christie in my adult life to know that sometimes she works well, sometimes less so. Which would this be?

It turns out, a strange mix of classic Christie, modern Christie, Christie commentary and something unfinished that makes it a most odd kind of book.

It begins with Christie’s traditional rather anonymous, milquetoast narrator, something along the lines of Roger Ackroyd. He is supposed to be working on his latest manuscript on Mogul architecture when he “had suffered from one of those sudden revulsions that all writers know…. –all the fascinating problems it raised, become suddenly as dust and ashes. What did they matter? Why did I want to write about them?” He takes a coffee in Chelsea, musing on the sinister noise of modern conveniences, when two of the ‘off-beat’ (and we chuckle a little at the naivete of the narrator) clientele get in a fighting match over a boy one has stolen from the other. I was struck by how present Christie seemed in his words, Mark’s musing on writing, the lament of “contemporary noises,” and dress styles of the new generation no doubt echoing her own.

Only a week later, Mark is reading the obituaries and realizes one of the young ladies who was in the fight has suddenly died, and will not be getting her kicks in Chelsea any longer. He feels sympathy, but then notes, “Yet after all, I reminded myself, how did I know that my view was the right one? Who was I to pronounce it a wasted life? Perhaps it was my life, my quiet scholarly life, immersed in books, shut off from the world, that was the wasted one. Life at second hand. Be honest now, was I getting kicks out of life?”

Really quite brilliant, both in hearing the author’s experience and age coming through, and in justification for Mark’s future actions. But not right away, of course. First he must pay a visit to his friend Ariadne Oliver. And once again, I heard Christie loud and clear: “Or, it might be someone wanting an interview–asking me all those embarrassing questions which are always the same every time. What made you first think of taking up writing? How many books have you written? How much money do you make. Etc. etc.” Just as I was chuckling over that, she launches in the oddness of murder in real life compared to books:

“Say what you like, it’s not natural for five or six people to be on the spot when B is murdered and all to have a motive for killing B-unless, that is, B is absolutely madly unpleasant and in that case nobody will mind whether he’s been killed or not…”

‘I see your problem,’ I said. ‘But if you’ve dealt with it successfully fifty-five times, you will manage to deal with it once again.’

‘That’s what I tell myself,’ said Mrs. Oliver, ‘over and over again, but every single time I can’t believe it and so I’m in agony.’

Really, the beginning bit of the story feels so clearly Christie commentary, that though the murder came along by page twenty, I was enjoying the digression and insight. So I was all set to adore, the meta and the concrete blending so nicely, when it turns out that a large portion of the plot is the new-fangled notion of the psychology of the individual (echoes of Poirot) being convinced through a combination of psychology and superstitious belief that they are ill, soon becoming truly physically ill, only to finally die. That sort of pre-60s, recast 1900s mysticism. Yes, there is a séance.

Then she interjects herself again, in the form of a chemist who is very excited to be a witness to the murder, having practiced memorizing faces for just such an opportunity. Oh, Christie, you sly dog. I might have giggled when he came along.

The Pale Horse was, I believe, was close to her fifty-fifth book, and just lacked something for me in terms of plot translation. Add to that that the transitions between sections was particularly abrupt, it wasn’t the charming, insightful read I first thought. The plot meandered for a bit, following the local coroner and detective, the coroner conveniently a friend of Mark’s. There is more than a bit of atmospheric silliness at the end that completely failed to develop much of an atmosphere for me–had we been talking decades earlier, perhaps I could have taken it more seriously–but there were a solid couple of plot twists at the end that I appreciated. So, mark down as enjoyable, diverting; worthy of thoughts on a long career and social change, but not one to add to my own library.

avid reader and Goodreads reviewer looking for a home.
View all posts by thebookgator →
This entry was posted in Book reviews, Mystery and tagged mystery. Bookmark the permalink.

2 Responses to The Pale Horse by Agatha Christie