The Forgotten Man by Robert Crais. Forget it. 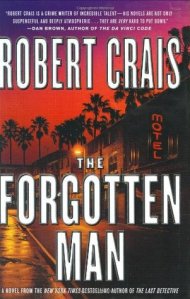 Into every series, a little unevenness must fall. Besides the first two books in the Elvis Cole series, this was my least favorite. But that’s mostly because it hit a couple of personal triggers: the perspective-from-the-killer-viewpoint and the angsty relationship.

In this one, Elvis is recovering from the events of The Last Detective, when his girlfriend’s son Ben was kidnapped in a bizarre scheme. Girlfriend Lucy and Ben have gone back to Wherever, Bayou, and Elvis is spending his days in a blue funk, moping about and watching the Disney clock tick. His inaction comes to an end when a dying man declares Elvis to be his son. It’s most likely not, but it’s intriguing enough to pull Elvis into the case and down memory lane. One of the detectives on the case insists on keeping Elvis part of the official investigation (as contrasted with many of his other police interactions), and Elvis finds himself working again with Carol Starkey, detective and main contact from The Last Detective.

Narrative takes a complicated turn in this book. We learn a bit about Coles’ younger years, but in a very piecemeal way. Interestingly, the reader gets the perspective of a younger boy rather than insight from a mature Cole. They are time flashbacks, and Elvis doesn’t share much interpretation, leaving the reader to draw their own conclusions about his mother and grandfather. Narration is also offered from Carol Starkey and another detective, Wilson. Then Crais makes the error of including a murderer’s viewpoint.

I generally assume that when an author brings in the perspective of a murderer in a series book, they’re getting a little bit bored and relying on a pov-change to add tension. But quite honestly, it has the opposite effect for me. It’s generally simply done, relying on tropes (sociopath killer or the mentally ill killer) over full characterization. Added into it is that I read these books for positive structure, the relatively clear-cut construction of personal ethics winning out over systemic and/or personal injustice. As far as I can tell, the three possible reasons for killers to be included at all are as a character study, to add tension, or to titillate with torture porn. I’m thankful that Crais stays away from the latter here, but other than that, it’s a miss.

I don’t usually scrutinize the plotting too closely in these books. As far as I’m concerned, it passes the first-sniff test. What I didn’t appreciate is Cole’s lingering despondency about Lucy and Lucy’s push and pull with their relationship. I appreciate that Crais may want to humanize Cole and perhaps give readers another emotional hook, but the combination of Cole’s issues surrounding a missing father and ex-girlfriend leaves both of us in an emotionally unpleasant place. If I wanted relationship drama and storm-crossed lovers with unrealistic expectations, I’d read YA.

avid reader and Goodreads reviewer looking for a home.
View all posts by thebookgator →
This entry was posted in Book reviews, Mystery, Thriller and tagged mystery, series, thriller. Bookmark the permalink.