Murder on Moloka’i by Chip Hughes 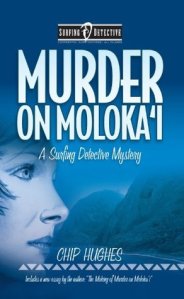 AKA, the review in which I absolutely can not be bothered to remember the details.

I have absolutely no idea how this found my way onto my radar. I think Hawai’i + mystery + environmental message kept it there. For some reason, I assumed also a Hawaiian narrator, but alas, no. He’s a gringo. Or the equivalent other word. Haole?

Short form: It’s decent but nothing special. Kind of like a good Magnum P.I. episode, I suspect, although my memories of watching Magnum are equally hazy. Beautiful scenery, a couple of attractive ladies, bonding with the dude that takes care of the mules. It’s perfectly serviceable read if you have it lying around on your kindle and your skull is too full of mucus to try and follow an epic space opera (I tried. It didn’t work). Best of all, it’ll even let you take a nap in the middle, unlike those other pesky mysteries that demand complete absorption. Lest that sound faintly damning, I’ll also say that it didn’t irritate me either. Not too much, at least. It was the perfect balance of vaguely interesting without being captivating.

So, surfer dude is also a private investigator. I can’t remember why, or how. Might not have been explained. Although he is white, he feels like he is a native Hawaiian because he was adopted into a Hawaiian family, but I can’t remember why. In fact, in retrospect, I can’t remember much about the lead’s history. He exists in the ‘now,’ which is pretty darn Zen surfer-dude of him. Perhaps it was hazy characterization. Hazy memory is also possible. There’s a really awesome woman that died, and her estranged sister who wants her murder solved. Instead of being forthcoming about details, the sister mysteriously refuses to answer questions. So she’s kind of vague and hazy as well, except I do remember that the narrator thinks she’s really hot but uptight (the reason is probably that she’s from Boston). And I think she has red hair, while her sister has blond hair, but I could be wrong about that. And her eyes change color from steely grey to something soft and fuckable. Super boringly obvious.

Our hero, whatever his name was, also has a way of connecting with all the locals by talking in a type of Hawaiian pidgeon that looks suspiciously like surfer dude talk with Hawaiin words thrown in. I appreciate the effort at cultural authenticity, except I kind of hate dialect of any form when written out (up here, we pronounce that ‘ow-wt,’ just so you are listening to it right). There’s loads of Hawaiian words sprinkled through the text, reminding me of Sandra Cisneros, but not in a way I liked. More in a ‘oh, this is what they mean by cultural appropriation’ kind of way, amiright pahdner?

So, surfer dude doesn’t entirely believe his rich, beautiful client, but gets involved because of the down-to-earth honesty of the mule dude and the utter suspiciousness of the four other riders who are clearly lying, along with the ex-husband who is also lying. Then there’s some stuff about a Hawaiian land trust and development and–

Where was I? Oh, to spice it up, his office gets rummaged through, and he gets warned off, and –this can hardly be a spoiler, people–he has sex with the beautiful client, because that’s what lonely P.I.s do. But don’t worry, he totally respects her space afterwards by thinking about his girlfriend. Anyway, there’s more hijinks as he gets close to solving the case, coupled with some absolutely astonishing cross-dressing. I mean, in the history of cross-dressing in mystery books, this was about as believable as Magnum P.I. trying to cross-dress. All it took was some makeup and a hat and a dress! I might have got a little eye strain at that point, but I’m totally sure it was the mucus in my sinuses, and had nothing to do with my eyes rolling around.

Wow, that’s a ton of detail for a vague little story. I guess the little grey cells were processing after all. Now if you were to ask me about it next June… The other vaguely interesting thing about this edition is that the author has an earlier–much earlier–version of the first chapter included. I didn’t read it because by then, I realized my way out of feeling cruddy was right in front of me all along: Kate Daniels.

Two and a half stars.

avid reader and Goodreads reviewer looking for a home.
View all posts by thebookgator →
This entry was posted in Book reviews, Mystery and tagged meh, mystery. Bookmark the permalink.