The City & The City by China Mieville 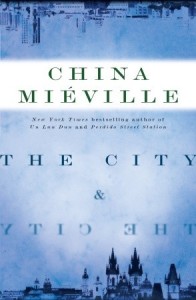 Can a city have a personality? I think so. Certainly the feel of Los Angeles is entirely different from NYC, and different again from Chicago, right? But what are the components to a city’s character? Despite being the centerpiece of the novel, The City and the City never came alive for me. Half the time I felt as if I  was reading a dusty encyclopedia description of a city and half the time an oddly paced but elaborate mystery.

The story begins typical for the detective-mystery genre: we follow Inspector Tyador Borlu of the Extreme Crime Squad to the scene of a murdered and nude woman. It is a seedy, run-down area full of addicts, and at first it appears as if she’s another lost soul from the streets. Tyador  commanders an eager young subordinate, Corwi, for her street contacts and legwork. Before long, an anonymous tip points them in the direction of Il Qoma, the city that lives within/alongside/interstices with their own city of Beszel. The citizens of both places are monitored by Breach, a mysterious authority who will spirit away those who mistakenly acknowledge the partner city without following proper channels.

“‘Why were you there?’
‘… It was a conference. ‘Policing Split Cities.’ They had sessions on Budapest and Jerusalem and Berline, and Beszel and Ul Quoma.’
‘Fuck!’
‘I know, I know. That’s what we said at the time. Totally missing the point.’
‘Split cities? I’m surprised the acad let you go.'”

The idea of two cities, co-existing in shared spaces but actually separate nations, is a brilliant idea. Unfortunately, Big Idea is all that holds this story together, which has little to humanize it amidst a slow and painful execution. It occurred to me that this is the premise of so many other books, the unseen co-existing with the seen, but I felt it was hard to get a grip on the intricacies of the schism.

Bezel and Il Quoma never truly differentiated for me. I think part of the reason is that Mieille relies on two main modes of describing his cities: the architecture and the political history. I felt very much like I was being given a lesson on Yugoslavia, or walled-Berlin, or one of the split cities so overtly mentioned. An example from page 43:

“In typical political cliche, unificationists were split on many axes. Some groups were illegal, sister-organisations in both Beszel and Ul Qoma. The banned had at varioius points in their history advocated the use of violence to bring the cities to their God-, destiny-, history-, or people-intended unity. Some had, mostly cack-handedly, targeted nationalist intellectuals–bricks through windows and shit through doors. They had been accused of furtively propagandising among refugees and new immigrants with limited expertise at seeing and unseeing, at being in one particular city. The activists wanted to weaponise such urban uncertainty.”

I can appreciate such description, but does it resonate? Evoke emotion? I think of Kate Griffin’s Matthew Swift series, how London comes alive with the lyrical descriptions, and wonder at the difference. Perhaps people would have helped, or further character-building of the ones we had. Histories of the characters could have been used to gain more insight into the schism between the two, but only Tyador’s youth is shared in any detail. About the only person that stood out for me was the detective’s superior, who humorously managed to undercut Borlu’s complaints with every line of dialogue.

I enjoy China’s word-play, particularly ‘grosstopically,’ in reference to things that are near in physical space but from different nations But the word-smithing didn’t feel as sophisticated as Embassytown or as fun as Kraken, which is interesting, as they were published in a three-year span. Most of the vocabulary was created around the idea of ‘unseeing’ the neighbor city and it’s occupants. Overall, the language felt stilted and excessively formal for genre fiction, further distancing me from the story.

It’s not that I don’t understand the exploration of the dissonant, conjoined cities. We take the noir detective format, incorporate a nice play on the idea of two cities, merged but unseen, occupying almost the same space with each other. It’s actually a relatively common exercise in the spec-fic/sci-fi world, giving an author (and reader) familiar concepts to latch onto while the author forays into stranger places. There are times the Big Idea works well and can carry a novel on its own, but for me, this wasn’t it. I’d suggest Only Forward if you want to play with the idea of city and identity.

11 Responses to The City & The City by China Mieville