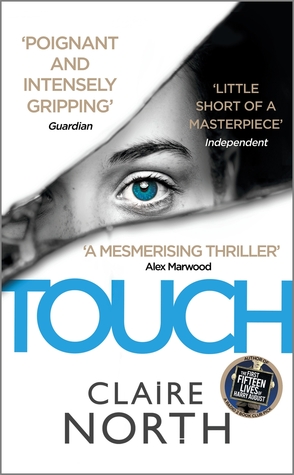 Kate Griffin–excuse me, Claire North–is one of a handful of writers on my ‘will probably read everything they write’ list (not that this means immediately, mind you. But an interesting and talented enough writer that I’ll likely give everything a shot. Probably. With a couple of exceptions). With that in mind, I had bought Touch on the cheap and saved it for a time when I could give it some proper attention.

I was both successful and a failure at this.

Before leaving on a ten-day vacation, I gave the first few chapters of Touch a try, and found it to be utterly engrossing. I forced myself to put the book down and pack it away in my backpack for the plane. Yes, the Kindle was going too. But there’s something about a paper book that just works for me.

Kate’s wonderful verbal imagery is pared down here, not nearly as enveloping as in the Matthew Swift novels, but still evocative and colorful. She’s found a narrative that gives her a great chance to exercise those world-building skills in a variety of ways, from brief snapshots of people’s lives across time to a multitude of cities in across Europe.

“I ran, my trousers soaking, my stomach empty, a bag of someone else’s secrets bumping on my back, past the half-shadowed faces of men with coats pulled across their heads, fighting for a cab, women with umbrellas turned inside-out, hair clinging to their pale, cold faces; teenage girls whose shoes were now too impractical for walking in, holding them by their heels as they waded through the riverine streets.”

The story is told in first person, by a narrator with a very unusual skill. Again, Kate–I mean Claire–puts her poet-like skills to work, demonstrating by cadence and format that the narrator has changed bodies.

So what went wrong? I’ll tell you what went wrong: children. Children on a flight from Minneapolis, Minnesota, to Miami, Florida. More specifically, the toddler and the kindergartner sitting behind me. Parents, please do the responsible thing, and drug your children before airplane travel. I promise that I will only judge you if you don’t.*

The older kid had to pee, and was afraid of the airplane toilet, so initially she settled for kicking my seat. While I can sympathize, I generally just hold it, instead of breaking out hollering in a full-on temper tantrum. And younger brother was clearly a sympathetic screamer. This proved a problem because I was in the last third of the book, and the story was getting quite intense, in a not-gentle kind of way. I put it down for a few minutes, turned my music on–high–and tried to relax. But the story kept niggling at me; I wanted to know what happened. I thought maybe I knew. But did I? Kate–I mean Claire–is not adverse to a little death and destruction. Was this the time that she’d kill a character off? I couldn’t resist the siren call of the story, little screaming hellion or no. But it’s hard to listen to the cadence of words in my head when my auditory canal insists on transmitting sound waves.

I finished as the plane landed, and think it’s a stunner of a book. But was it the moving experience my friend Mimi had? Did I immediately want to read it again, as I did with Kate’s other book, Madness of Angels? No. But I think I’ll blame the parents on that, and not Kate–I mean Claire.

avid reader and Goodreads reviewer looking for a home.
View all posts by thebookgator →
This entry was posted in Book reviews, Urban fantasy and tagged mindbender, supernatural mystery, urban fantasy. Bookmark the permalink.