Chaos Comes (After the EMP #4) by Harley Tate 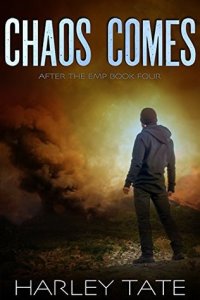 A few words about this series: to date, the “After the EMP” book series has been in trilogy format. “After the EMP” one through three follows Madison, her friends and her parents as they cope with the aftermath of an electro-magnetic wave wiping out California’s electrical grid. Chaos Comes begins the second trilogy which primarily follows Colt, a former SEAL, and Danielle, a teenager who comes from an underprivileged background. The third trilogy that begins with Southern Grit, follows a middle-class white couple as they cope with disaster in Atlanta. All are novella length and quick reads.

And now a few words about my timeline: I had a very significant eleven-day vacation, returning late Thursday night after a will-they/won’t-they fly flight, followed by a post-travel headache on Friday, and two days of work on the weekend. That all would have been tolerable, had not major construction begun on our house’s only bathroom on Monday. All the tile ripped out, new bathtub, new drywall, new floorboard. Changing this wasn’t optional, as we had been in the contractor’s line-up for months. Then, just as the project was nearing end (you know, not at the end, but at least with functional toilet and ability to take baths), he announced he’d also begin on the deck remodeling, which entailed removing an old wooden deck and replacing it with a composite. Understand, all of this takes place in context of a house with two dogs, one of which is territorial, and two Amazon parrots, who absolutely adore drama and feel they can best contribute by screaming loudly. For extra layering, let’s remember I work as a hospital nurse, late shift, from 3pm to 11:30pm, so I absolutely never go to bed before 1a.m.

Is it any wonder I was ready for the world to end? Chaos begins, indeed.

Chaos Comes reminded me in the best way of an 80s action movie. Our good guys are Good Guys, and have loads of redemptive moments, even if they are just a little bit oinkish. Things are going to Work Out. Using Danielle (‘Dani’) as a main character gives Tate a little chance to explore the idea of how someone used to fending for themselves might manage in the apocalypse. I rather liked Dani’s character in this one, as well as Cole’s gradual realization that even if he has skills to save himself, no man is an island.

I thought it was better written that the first book in the series; not that the first was terrible, by any means, but it felt like the storyline was more cohesive and focused. There’s still a few awkward writing moments like when the Bad Guys make their intentions helpfully and publicly clear, but really, it’s a technique I think we’ve all become used to from television and movies:

“Request for clarification, Echo 6. If we encounter hostiles what is the protocol?” The radio crackled. “All hostiles are to be eliminated on sight. No prisoners are authorized. Over.” Colt blinked. It was true. “

“Not the video games and the 24/7 news and the never-ending quest for escape. But the little things. The simpler things we can all get back to”

but that’s mitigated by a moment of two of self-aware humor:

Definitely what I needed during the past few weeks. I highly recommend it if you are sleep-deprived and cranky.

avid reader and Goodreads reviewer looking for a home.
View all posts by thebookgator →
This entry was posted in Book reviews and tagged end of the world as we know it, series, thriller. Bookmark the permalink.