Chaos Evolves (After the EMP #6) by Harley Tate 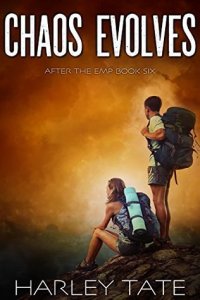 The one where Everything Goes to Hell (despite it being only Day 30 post-electromagnetic pulse) Because Some People Just Can’t Freaking Cope Already.

In this installment, the team decides to leave the militia-run town. I immediately appreciated characters who knew when to cut ties with a town instead of fight an overwhelming force, because I was a little afraid the former Navy SEAL, Colt, would want to topple the forces of oppression. Another aspect that was a positive standout were the strategies for sourcing food and fuel early on, one of the main components of apocalypse stories. Later, however, it skimps on detail when food issues come up again near the end, relying on a (view spoiler) Tate still seems to struggle with balancing scenes in context of overall plot, as there far too much page detail of a Humvee crossing a stream. Maybe his point was that it contributed to the mental stress of the group, but I’m not sure the writing was up to the task. I’m convinced, Tate; you know your types of Humvees. Can we get back to the relationships and finding food?

I was less enamored of plotting here. While leaving the town started off well, problems along the way occasionally annoyed as they were as in-group focused as external. Blaming the protagonists continues as an eye-rolling plot strategy. And somehow, despite it being Day 30, (view spoiler) On the other hand, much like in book three, things don’t always work out despite the best planning. Still, I feel like it was all a little stacked for Day 30 or so. (view spoiler)

Okay, I admit it; I’ve overdosed. But there’s only one more, and then I can let my Kindle Unlimited trial expire!

And one of these days, I need to get around to writing my own damn apocalypse novel.

avid reader and Goodreads reviewer looking for a home.
View all posts by thebookgator →
This entry was posted in Apocalypse & dystopia, Book reviews and tagged end of the world as we know it, my library, series, thriller. Bookmark the permalink.