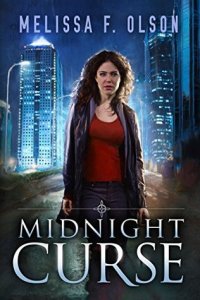 You know what I mean, right? How often had you had a conversation when a friend asks if you’ve eaten anywhere good lately and you say how fabulous the popcorn you just had was? (am I the only one with foodie friends?) Not at all, I’m betting; while popcorn is salty, crunchy fun, it is ultimately unfulfilling and forgettable. Though Midnight Curse was actually a bit above ‘popcorn’ in my reading scale, largely by setting up a number of tropes and then ignoring them.

You may notice the official title says, ‘book one.’ It forgets to mention its the second trilogy written with the lead character, Scarlett Bernard, which is actually a good thing. Some authors (Karen Moning, cough, cough) seem to think one needs to start with an ‘unlikable’ character in order to have the character become someone the reader likes, presumably to avoid Mary Sue characters. This worked out in my favor, because I enjoyed the current Scarlett who is apparently three years older than the last series of books. She’d make references to events earlier in her life, and sometimes I thought, “hmm, sounds like an interesting backstory,” but once or twice I thought, “ugh, glad I didn’t know her then.” Here I thought that Olson was doing a Star Wars thing (sigh; starting with book four to six, then working backwards? Okay?), but I guess that was too much credit. Somebody do that, okay? (Besides Lucas, because that didn’t work. Or is it because we don’t really want prequels in our stories? Did he break a Campbell rule?)

“There wasn’t actually an ominous creak, but it was definitely implied.”

The story is told by Scarlett, with moderately amusing commentary mitigated by tough emotional situations. I usually appreciated her attempts to navigate situations in a mature way, so score a book point for relative emotional maturity. She is finding enjoyment and security in her professional life as a Null, mediating between vampires, witches, and werewolves. She’s a guardian for Shadow, a semi-mythical wolf-hunting creature that is a smart, calm dog-hybrid when in Scarlett’s range. Shadow easily became one of my favorite characters in the story.

Scarlett’s ex-roommate/former BFF calls her for help. She’s a vampire who has accidentally killed the ten women she’s living with. This is by far the weakest part of the plot line and never adequately gets addressed. Once I got past that, it became an engrossing story that I had a hard time putting down, despite my knee-jerk tendency to dislike stereotypical wolf and vampire urban fantasy world-building. It could be that Scarlett was a fundamentally likable character, but it could also be that my genre expectations are just so low that Olson never hit any of my trigger points.

I was tempted to continue the series, but found my enthusiasm dampened by descriptions of the next book, hints that the supporting cast is largely absent, and a friend reviewer who notes that Olson seems to drop major plot bombs and then end the book. Who knows, however–the UF mood may strike again.

avid reader and Goodreads reviewer looking for a home.
View all posts by thebookgator →
This entry was posted in Book reviews, Urban fantasy and tagged female lead, series, urban fantasy. Bookmark the permalink.