Ben Aaronovitch is a talented writer. And a very, very slow one. I try not to complain, because at least his books are dense enough that they tolerate re-reads and re-listens. But eventually, I miss the world of the Folly and turn to the graphic novels. Detective Stories is one of the more satisfying novels to date, at least in terms of story complexity and Ben’s voice. Structured around Peter’s application for an advanced position as Detective Constable, he reviews four cases with Detective Chopra, including a couple from when he and Leslie were partners. There’s one that involves a ghost and a seance that was really well done, and gave the artists a chance to play with their 50s-60s styles.

Acting as intermission are a couple one-page stories (I hesitate to use that word, as they are more like ‘setting, thing, action, consequence’ than stories) that are less successful. This clever-fox driving one kind of eluded me.

The graphic continues the structure of setting apart Peter’s sarcastic/informative inner voice with actual dialogue. There’s a lot of acronyms, which is only fair, as the entire premise is one of inter-department discussion, but the additional asterisks of explanation are a bit distracting. As usual, the end pages have a cover compilation. This one also includes a brief history of the Metropolitan Police, which was interesting. But. But. But. I like actual words and all that around a story, so can’t we just get a short story where Peter thinks about these things while chasing ghosts? 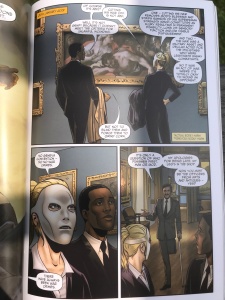 Four stars for the narrative/ plot, a weak three for the structure. In the history of the graphic novels, I’d say it’s one of the top two. Call it three and a half, rounding down because it’s an effing graphic instead of a book.