The Wild Dead by Carrie Vaughn 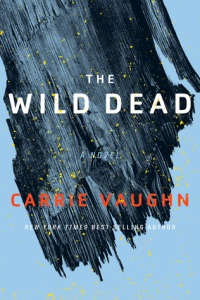 There’s loads of descriptions and reviews out there about this book, which surrounds solving a murder in an isolated community. The setting is a post-Fall world with limited resources, which is what ultimately elevates it above the average cozy mystery for me. Characterization is solid, although the description of just how tired Enid is had me exhausted by the end of the book. Although I found the world vaguely intriguing, it lacked the character connection or plotting that could have made it unquestionably four stars. I was supremely unsurprised by the murder; my only surprises were the behavior of Enid’s co-Investigator who is fresh out of training and the community dilemma of the falling-down house.

Vaughn’s writing has definitely improved since I last read her ‘Kitty the Werewolf’ books, but she’s almost too good at it this time: everything about this book is pensive and melancholic. While I enjoyed skill in the writing, I experienced the same kind of feel that endlessly unpleasant weather brings.

“Most regions Enid visited, she could find something to love about them, some enticing and beautiful detail about the landscape, the people, the mood of the place. A reason fold would want to stay and scrape out a living in less-than-ideal situations when a dozen other settlements had more resources and less disease, and would gladly welcome extra hands. Even the rainless, baking salt flats at the southernmost end of the Coast Road had isolation to recommend them, for those who wanted to be left alone. And just to show that every place had a reason for existing, the people of Desolata household there exported the sold they collected form the flats on their own trade route.

But here in the Estuary, Enid had to consider for a while what exactly the appeal was. Over the damp marsh where the San Joe River drained, clouds of bugs rose up through a sticky haze, shimmering with heat. Squealing gulls gathered, circling on slender wings, drawn by some rotting treasure. There were no orchards here, no pastures, no rippling fields of grain.”

avid reader and Goodreads reviewer looking for a home.
View all posts by thebookgator →
This entry was posted in Apocalypse & dystopia, Book reviews, genre-bender, Mystery, Science fiction and tagged end of the world as we know it, female lead, mystery, sci-fi. Bookmark the permalink.