Other Minds by Peter Godfrey-Smith

Posted on September 11, 2018 by thebookgator 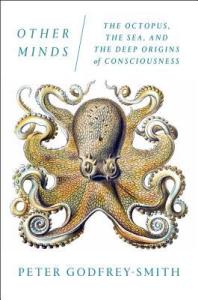 Octopi, or the floppy floppy spider of the sea,”(source: ZeFrank)  are pretty freaking amazing. Godfrey-Smith agrees, which is how this book came about. As he notes on page 9,“If we can make contact with cephalopods as sentient beings, it is not because of shared history…but because evolution built minds twice over. This is probably the closest we will come to meeting an intelligent alien.”

Unfortunately, he tried to marry it with one of his professional passions, the philosophy of consciousness, and that’s where this falls quite short. The beginning chapters have a quick explanation of the evolutionary tree, and then start tracing the origin of life and neurons through a brief look at the fossil record. This is supposed to impress upon us how different we are from octopi, but if you didn’t already know that, I don’t know how you would have selected this book. So that was weird to me. Each chapter has a teaser opener of a real-life octopi situation, then goes into theory.

Julie has a very solid, thorough analysis on what went wrong, and why, and I strongly suggest it if you are wondering whether or not this is for you. I am occasionally in the mood for philosophy, but grow quickly tired of discussions of perception of pain, consciousness, and possible perception of self. To me, it quickly boils down to experience: I see something witness and try to escape potential pain/pain; therefore it experiences it enough that it deserves consideration, does it not? Does it actually matter if it conceives of itself as an individual? Whatever. That isn’t the point: the point is that these conversations quickly grow tiresome to me because it seems the ultimate in superiority complexes, all the more ironic coming from a race that can’t manage to not to destroy its own environment. And now I’m off track again. Anyways, here’s what’s interesting:

-octopuses can recognize people. They also tend to squirt water at things they don’t like. There’s numerous anecdotes of octopi specifically targeting a person they don’t like, or all new visitors to the lab.

-the Ediacaran period had peaceful creatures that were basically like bathmats that crawled around munching and seemed to not have sophisticated sense organs or protective armament. I have no idea what this has to do with octopi, but it’s a super fun visual image. I picture a herd of bathmats grazing on my lawn.

-cuttlefish are also cool, and may actually be color-blind, although they have the astonishing ability to blend with their environment.

-there’s a secret octopus garden on the east coast of Australia. Or in a Beatle’s song. Which is awesome.

There’s some neat colorplate photos in here, as well as some black-and-white drawings and illustrations in an attempt to help the reader with visuals (ie., evolutionary tree, the fossil record). The end chapter where he talks about studies at Octopolis are genuinely interesting, and I would have read much more about what’s coming out of there. Actually, now that I’m listening to it again, watching ZeFrank is a quicker, and more fun, and references many of the same octopus facts that were in this book.

avid reader and Goodreads reviewer looking for a home.
View all posts by thebookgator →
This entry was posted in Book reviews, Non-fiction and tagged animals-and-people, non-fiction, science. Bookmark the permalink.

2 Responses to Other Minds by Peter Godfrey-Smith