Posted on September 18, 2018 by thebookgator 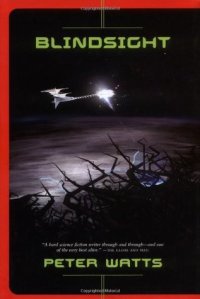 This is a very dense book, packed with ideas. Although Watts mentions he’s a biologist by training, you wouldn’t know it, between all the astronomical events, the neurological side effects of radiation and methane exposure, and the philosophy of consciousness. It also is not an easy book. I ended up waiting to finish it on a vacation day, where the book and I could spend as much time as we needed. In this way, it reminded me a great deal of Miéville’s Embassytown.

The narrative is fragmented into pieces, alternating between a linear description of a sort of first-contact event, and fragments of Siri Keeton’s life, primarily from his youth and from his only romantic relationship. This is a future Earth where most people have been genetically engineered before birth. As they age, more and more people are choosing to join Heaven, a type of virtual reality for their consciousness, allowing their bodies to be stored elsewhere once they commit. Siri was an epileptic, and had half his brain removed to prevent further seizures. It left him with a curious sense of distance, which he developed into a skill, becoming a professional Synthesist. When an alien invention surveys Earth, a group of people are sent to the most likely place the aliens are lurking. Siri is part of that team as a professional observer.

It’s a complicated story, and while Watts does eventually provide many of the explanations (details on Heaven, details on vampires), it a faceted kind of story; you have to hold all these images in your mind and hope that they’ll coalesce at some point. They mostly do, although there’s a few spots when I think Watts has a few too many pieces to make into a coherent pattern. I was hoping for some sense of ‘ah-ha,’ but am instead left with a sense of both stretchy-ness and ‘hmm.’ The biggest idea is surrounds the idea of the brainstem, of function without consciousness.

“‘You think Rorschach grows them on some kind of assembly line. You can’t find any genes. Maybe they are just biochemical machines.’
‘That’s what life is, Keeton. That’s what you are.’ Another hit of nicotine, another storm of numbers, another sample. ‘Life isn’t either/or. It’s a matter of degree.”

I will say that the first contact bits turned out to be absolutely fascinating, as well as the ideas of magnetic atmosphere and methane gases causing issues of health and perception. His discussions on game theory and first contact are depressing as hell and would probably be a real strategy by some people.

Writing is occasionally transcendent. All in all, I’m going to have to bump it up after my second read. While I may not like every one, and certainly hope that humanity will do better, I have to say that this was one of the most stunning first contact stories I’ve ever read.

Their marriage decayed with the exponential determinism of a radioactive isotope and still he sought her out, and accepted her conditions.

The weakest spot for both me and my co-readers on my second read was the inclusion of the vampire species. It felt somewhat weak, and like there were other mechanisms Watts could have used to accomplish those same goals. Nonetheless, I think it’s quite an amazing book, with a lot of food for thought.

I will say that the first contact bits turned out to be absolutely fascinating, as well as the ideas of magnetic atmosphere and methane gases causing issues. His discussions on game theory and first contact are depressing as hell.

Of the Goodreads reviews, I would point you towards mark monday’s, who addresses the philosophical angle Watts seemed to be heading toward. Lightreads also has an uncharacteristically long, but characteristically brilliant, review that includes a nice note of what the reader is in for, as well as a long segment of Watt’s writing. I happen to agree with Lightreads, that I’m guessing it would read best if one is conversant with some of the -ologies in the book. Off the top of my head, linguistics, astronomy, philosophy, evolution, neurology, biology, and physics all play parts in the story.

I particularly enjoyed Watt’s general insights and elaborations at the end of the story. In a way, they are mini-essays that are the foundation of the book, including ‘Sleight of Mind’ (hacking the brain), ‘Are We There Yet’ (the space travel insight), alien anatomy and physiology, and ‘Sentience/Intelligence,’ all of which are heavily footnoted, usually with articles or journals. I laughed at footnote #130: “This validates me, and I wish it happened more often. ¹³°

Note for later–short film Watts consulted on (5 minutes) for re-read (thanks, Caro!): https://www.youtube.com/watch?v=VkR2h…

Read again March 2021, with a lovely group of people: Nataliya, Stephen, Phil and David. Thank you all for your additional insights.

avid reader and Goodreads reviewer looking for a home.
View all posts by thebookgator →
This entry was posted in Book reviews, Science fiction and tagged four star, Hugo /nom, sci-fi. Bookmark the permalink.

4 Responses to Blindsight by Peter Watts