Posted on December 9, 2018 by thebookgator 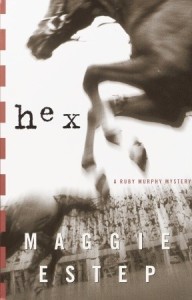 I sought this book out because of Sara Gran, author of Claire Dewitt and the City of the Dead, mentions it in an interview listing five of her favorite books and the writing lessons she learned from them. In this case, Gran notes that she learned you can take mysteries and set them in places you know and love; in the case of Hex, the oddly conjoined worlds of Coney Island, a Queens racetrack and Julliard School of Music.

So anyway, this is good stuff. I realized rather quickly that it wasn’t really about the mystery, not very much. It’s like one of those lit-fic books that is about a group of people connected to the main character, Ruby, sort of like a Tales of the City, I imagine, with a lot less sex and a lot more mystery. Although there is quite a bit of sex for a mystery book, at least the kind I tend to read, where lone private eyes are, you know, lone. It does lead to one detraction for me–besides the fact that it was included at all–in that all the women love sex, all the men are irresistible, although many of them have various hang-ups, and apparently, no one who has sex is gay.

All of that aside, characterization is interesting. It’s all first person point-of-view, largely from Ruby’s viewpoint, although every other chapter is from one of her friends or neighbors. Somewhat surprisingly, because sometimes it seems like there’s a certain sameness to an author’s style, the voices all feel quite different. Estep manages to make most of them feel quite human: troubled, caring, vulnerable, funny.

The writing is solid. The stables, the subway, Coney Island; all feel very real, artfully created for the reader in a few solid sentences. As Gran mentions in her description, “Maggie took the amateur sleuth mystery and put in a world she loved and understood.” I can picture the opening scene so clearly, I feel like I’m there:

“I’m eyeing a willowy blond woman’s red wallet when the F train stops abruptly, causing two large Russian ladies sitting across from me to loose control of their grocery bags. As the Russian women make loud guttural exclamations, frozen pierogies spill out of one of the bags and all over the mottled floor.”

I wasn’t so sure about the narrative from Ruby’s good friend Oliver at first–what was he, an addict?–but he turned out to be a fascinating, unpredictable character.

“Some days it’s so bad I can’t move, other days it’s the kind of bad where I have to move. I wasn’t quite sure which this was gonna be but the sun was streaming in, blending with the bright yellow of the walls, hurting my eyes a little with its brilliance, and though I was nauseated and had pain traveling up and down my body, I threw back the covers, got up, and put on Ol’ Dirty Bastard’s first record, which I knew was the only thing that would get me moving.”

Which reminds me of a small complaint: I didn’t care for how his character was dealt with in the end. It felt more plot-convenient than realism convenient, and everything until then had felt quirky-but-possible, but that just seemed highly improbable.

I’m wandering all over, aren’t I? It’s much like this book, really; there’s a plot, certainly, but the reader has to be okay watching it wander, or waiting as pieces slowly come together, with occasional sidetracking. It’s kind of like going to ride your favorite roller coaster at an amusement park, in fact: you may have an ultimate goal, but half the point is the walk getting there.

avid reader and Goodreads reviewer looking for a home.
View all posts by thebookgator →
This entry was posted in Book reviews, Mystery and tagged female lead, mystery, NYC. Bookmark the permalink.