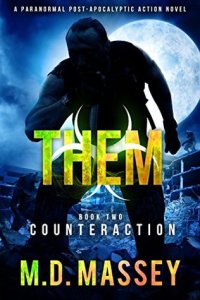 You know when you are kind of bored and channel-flipping, and you land on SCYFI channel or whatever it is these days, and you are watching people battle zombies, and then another, weirder zombie comes out of nowhere and it’s kind of funny and you start laughing because it’s just so damn dumb?

The lone hunter, aka ‘Scratch,’ is out killing supernaturals in the post-apocalyptic world (nuclear, zombie, supernatural) when he hears a rumor of SCARY THINGS massing to the east. He must check them out, now. (Ridiculous plot spoilers ahead–meaning the plot points themselves are ridiculous, not my sharing of them) (view spoiler) In a real horror movie, you’d groan if the hero went looking in all the darkest, most unsafe places. Here, you just gotta laugh and cheer him on.

There is–I kid you not–a surfer werewolf. If that isn’t meant to be camp, I don’t know what is. But he was funny. Young Keanu Reeves can play him in the movie. Humorous cultural references are made (Blade, Romero films), with asides on no one getting the jokes anymore.

“‘And he likes to watch some stupid show called Scooby-Doo, with this dog that talks and a bunch of kids who are about as dumb as rocks. Moving drawings…creepy. All the monsters are fake on that show, too.’ She shook her head in disgust.”

Nevermind the sense of it, my own tolerance for 300 pages of camp is low, so halfway through the book I found myself checking page numbers. Acceptable stringing-of-words-together can’t save a basically ridiculous plot and cutout characters. Although Massey attempts some character depth and ethical conflict (“be better than the others,” “what’s human?”), it’s too one-note and never sells, since the hero has to reverse himself in another ten pages. The same ethical conflicts stand in for character development for the female character.

“Gabby, I’ll kill a deader, a rev, a nos’, or a ‘thrope in a heartbeat, and I expect you to do the same. But when it comes to killing our own kind, we need to balance our will to survive with remembering what it means to be human.”

Nevermind that they are running with a ‘thrope, or that the human they allow to survive becomes a repeated problem. Because what’s this genre for, subtlety?

Narrative is first person. Info-dumping is limited, which I appreciate, and largely seems to concern swords, the undead, and the conflict at hand. Complete with commentary.

Basically, it’s a poorly developed episode of Supernaturalwithout the eye-candy or visuals. Clearly, your mileage will vary depending on what you look for in an apocalyptic, monster or zombie read. Read at your own risk.

avid reader and Goodreads reviewer looking for a home.
View all posts by thebookgator →
This entry was posted in Apocalypse & dystopia, Book reviews and tagged end of the world as we know it, meh. Bookmark the permalink.

3 Responses to Incursion: Vampire Apocalypse, aka ‘Counteraction’ by M.D. Massey