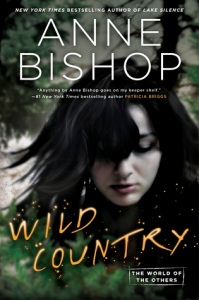 The short version: Wild Country is All The Books in The Others series thrown in a food processor then tossed together in a fruit salad. In other words, there’s nothing that’s new, but presentation is everything; it feels a bit fresher, more streamlined, and better paced. I’ve been trying to figure out if I could recommend people just read this book and skip the rest. Maybe.

Given that this contains All The Details from prior books,* I’ll note that it fixes many of the shortcomings, particularly those in plot. Since I adored mail-delivering ponies, I didn’t mind the endless details about such in Book One (Written in Red), but I don’t blame people who do. All of that is shortened here. The villain scenario–believe me, I am spoiling nothing here–is essentially the same as in Book One to Five (I can’t speak to Six, since I skipped it). Bishop doesn’t believe in shades of grey, and inevitably her antagonists are greedy, abusive, misogynist, human-first people who kick kittens and puppies for fun. Non-people are never villains.

Narrative viewpoint wanders. It’s limited third person, skipping from head to head so that Bishop can pretend to build some tension between the forces of Nature and those who wish to challenge/exploit it. I, being the impatient, shallow person that I am–get to some people-punishing, please–skipped the viewpoint of the Bad People. Plus, gross.

One of the things that keeps me coming back to the series is the idea of active, animate environmental reclamation. I read a LOT of apocalypse stories, ranging from disease, zombie, nuclear, environmental, but only Anne Bishop connects monsters with environment repair and envisions a nature that actively reclaims civilization. Of course, that’s as far as her world-building goes. It’s actually one of the most poorly thought-out worlds I’ve ever read that has made it past the self-published stage.

Bishop actually cracked me up because in the prologue, she thanked a number of people for their help with animal information. I’m not sure what ‘information’ they gave her that couldn’t have been found in a first-grade primer. I mean, there was a canary that ate bird seed, some fighting dogs that went feral, some horses in a corral and some cattle that were killed. And two puppies. The rest of the time she explicitly states (almost word-for-word) that the terra indigene, while modeling themselves after a species of animal, are not actually that species, and thus have needs that species does not share. So I’m not sure what help her friends gave. That new puppies should have a crate? Get the runs if they eat raw antelope?

I wish people ‘helping’ her would have said, ‘Anne, hey. How can you have localized computer networks with email and fax machines after the terra indigene wiped out 75% of humanity? How come you still have DVD players with new movies made by the terra indigene? Where are all the damn peeps mining your cobalt and platinum, and whose assembling your circuit boards in a sterile environment? But since you tell me you are limiting gas and there aren’t very many people, and food resources are a little limited, where does the electricity to run the computers come from? And don’t try to sell me an electric dam, because that still brings us back to a manufactured metals problem. And why are your Inuit people giving a damn about who the property heirs are for Bennett? Weren’t the residents killed because they killed a bunch of terra indigene?  Why are the Inuit worrying about possessions for the next-of-kin after a world-wide disaster? Don’t you have a food shortage? Isn’t 75% of the population wiped out? And where did all the people come from so fast to settle Bennett when 75% of the pop was wiped out… but apparently none of the Blackstone Clan, that their numbers rival the terra indigene?”

Ignoring all that, there’s a sorta problematic thing with a person who likely has Down, who the wolves call a ‘skippy’ (‘Skippy,’ was a mentally challenged terra in an earlier book), and it’s bizarre, given Bishop’s other series, that there’s an aside with a woman who likes “non-vanilla sex” (this is explicitly said) ends up… well. Not with a happy ending. And of course, there’s the general thing that gender roles are pretty much 1950s, except gay men are cool.

So, flip the little switch in your brain that has to do with logic–just like you do in a zombie movie–and go along with it. Try to ignore the fact that Bishop’s world logic isn’t consistent. Just go with it. It’s kind of a fun tale, lots of ups and downs, a weird sort of frontier theme happening, and sort of happy ever-afters, although I gotta say, I do think Bishop wasn’t very kind to Virgil. I might buy the e-book version–if it’s on sale.

*Seriously. A non-exhaustive list includes–and do you really think these are spoilers?–and all of these are brief–Air on a pony, “speak prophet and I will listen,” review of what happens to male Cassandra sangres, stocking grocery stores, review of how email works, watching movies, reading books, color-changing hair, pizza delivery (because post-apocalypse, natch), train-riding, howling, encountering Elders, jokes about eating people, eating people, Inuit spidey-senses

avid reader and Goodreads reviewer looking for a home.
View all posts by thebookgator →
This entry was posted in Book reviews, Urban fantasy and tagged animals-and-people, urban fantasy. Bookmark the permalink.