A Dangerous Man by Robert Crais

Posted on October 9, 2019 by thebookgator 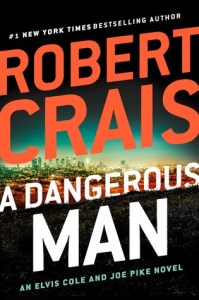 A Dangerous Man is distressingly like Taken (Cole/Pike book #15), except that we skip the twist. It also reads more coherently; though Crais can’t resist cutting other viewpoints, including that of the kidnapper, the action is more streamlined on kidnapping and recovery.

On a related note, it seems that Crais might be succumbing to what I consider the Parker Phenomenon; ie., the gradual simplification of the book as a work of creation through the course of a long career (So named because the difference between the beginning Spencer books and the end Spencer books is so stark that they might have been written by different people).  Along with scene and word simplification comes greater white space. What do I mean? This one is broken into sections, with a faceplace to each section, and each section broken into short chapters. At almost halfway through the book, I was on ‘Chapter 25.’ Loads of white space in the margin. I remember that trick from college, the one where you stretch out the margins to 1.25″? Overall, just not the same caliber as L.A. Requiem or even Chasing Darkness. I mean, I wouldn’t begrudge either of them quitting; honest. After 25 years doing the same thing, I’d be bored too. Can’t they just re-brand or something, like yogurt or Subway and call it the Lite version? ‘Joe Pike: Improved! Faster than Ever! Finish Your Book in Record Time!’

Speaking of, it does move fast, once the pieces fall into place. Crais thankfully avoided a couple of the tropes he pulled on in prior books, so that adds an feeling of difference. Besides, it is always nice to witness Joe be an agent of retribution, or vengeance, or something like that. It’s like John Connolly, only happy. Action-movie version.

I noted some vaguely uncomfortable bits in dialogue and texting between two twenty-something single women, that felt vaguely … weird. Did Crais sub this out to his niece? It feels incongruent. Again, just not up to earlier caliber. I can’t tell if I was supposed to laugh, or feel like the women were ‘real-life’ or what, but their sexuality and obliviousness just didn’t sit well with me. Add it to the lack of atmosphere, character depth or subtly, and I’m starting to file Crais into my mental ‘airport-level-thriller’ category of read and forget (I mean quickly, as opposed to my normal level of forgetting).

The mom’s getting this one in large-print, so we’ll see what she thinks.

avid reader and Goodreads reviewer looking for a home.
View all posts by thebookgator →
This entry was posted in Book reviews, Mystery, Thriller and tagged series, thriller. Bookmark the permalink.