Small Vices by Robert B. Parker 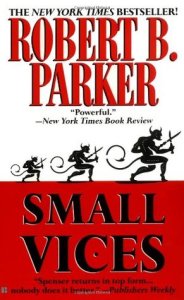 Having read this over a decade ago, it wouldn’t normally make the re-read list. However, the dad enjoyed the last Parker book I gave him, so I thought I’d try another, and like any helicopter parent, I had to read it first.

This is the one where Spenser’s hot red-headed friend Rita–who is also an incredibly good lawyer–asks him to find out the truth for a case she and another new lawyer are feeling a bit guilty about, though they both did their jobs. A low-life black man was arrested for the murder of a white female college student, but nothing about the case seems right.

It’s notable for its casual insight into racial and economic issues–only scratching the surface, but still notable for the genre. Also notable for going waaaaay off the rails after someone hires the Grey Man, resulting in a number of chapters that literally have nothing to do with the murder. Also notable for Susan’s temporary journey into insanity when she decides she wants to adopt a child (I love how these two are in their late 30s/early 40s forever).

Still, it’s not Parker’s worst. I’ll pass it on to dad, but I’m guessing it will not be as enjoyable as the last book.

avid reader and Goodreads reviewer looking for a home.
View all posts by thebookgator →
This entry was posted in Book reviews, Mystery, Thriller and tagged mystery, series, thriller. Bookmark the permalink.