Semiosis by Sue Burke. Or, Don’t Believe the Hype 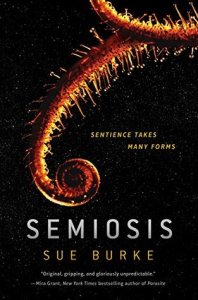 I need a good solid hate read in my life, or at least I need to find a book that doesn’t leave me with this much ambivalence. A buddy read with Cillian, she found this one far more displeasing than I, (spoiler: though with reviewing, I edged further into the negative). I, in typical carol. endurance fashion, persevered, and found it to be a very uneven experience.

The premise is straightforward: a group of colonists has landed on Pax, fleeing Earth’s environmental catastrophes and endless wars. They are looking for peace, but to no reader’s surprise, end up on a planet that seemed hospitable. Only, in the tradition of first colonization stories everywhere, stuff happens. In the first few pages we learn three people have gone missing and are presumed dead. Of that of the fifty people who had left Earth “We had hoped to create a new society in full harmony with nature, but nineteen people had died of accidents and illnesses since we arrived.” (spoiler: without genetic engineering, our humans are going to face a serious bottleneck).

Narrative is broken into seven sections, narrated by seven different people. The first three sections occur almost thirty years apart, encompassing different generations of colony evolution. Unsurprisingly, they read like separate novellas. The first feels like a first landing story, about the hardships of colonization and the history of the group on Earth. The fourth has a strong mystery-thriller plot. The last four sections all take place within two years, beginning 106 years after the colonists landed, and generally are more congruous. The events of the fourth end up shifting the colony’s direction significantly.

The good news about this is that with a variety of human viewpoints, there are some who should be more successful with the reader. Personally, I disliked the happy-go-lucky mentality of Lucille, but it probably ended up being a fitting choice for the events in that section. Characterization was fine but something just feels somewhat uninspired. Perhaps because the characters themselves are ambivalent about what they are facing in their sections. They all have very mixed feelings about what they are facing; few are absolutely convinced their way is right, with the exception of Sylvia, in Section Two.

Burke did plant research, and some of the most awkward moments of the book come from when she’s determined to show it. Not like Peter Watts’ Blindsight, who’s nearly every moment is full of neuron-stretching moments, or Adrian Tchaikovsky’ Children of Time where insect biology and evolutionary theory is seamlessly inserted into Portia’s narrative. No, this is terrible:

“I have flowers near Violet’s house. The petals ordinarily produce geraniol, a fragrant alcohol; quickly I switch the output, remove a water molecule and rearrange the chemical bonds, and send out beta-pinene. The stamen usually produces nerol, a citrus scent, and the chemistry is a bit trickier, but I subtract three carbon atoms and four hydrogen atoms, in the process removing and replacing the oxygen atom and it is 2-heptanone. The chemicals are lightweight; even on a cool night like this one, they boil away as fast as I can make them.”

Oh dear. Germane? No. Congruent? No. Does Stevland talk like this, in chemicals, the rest of the story? No. (Although that would have been an interesting angle to take). It’s just so much text, a journalist’s showy, “look at my research, Teacher,” without thinking about the overall purpose, and the effect, which is to seriously break up the pace and tension of a fraught scene. It is dumb. I’ll note that the first section, with the advanced technology of future space-faring Earth feels the most science-light. I think she reserved the research for the plants.

I spent no little time thinking about this book and my reaction to it, wondering what exactly Burke was hoping to achieve. Personally, I was hoping for a story about sentient plants. But Burke glossed over that science and seemed happy making the plant just a sort-of-human (Stevland decides to grow a “humor root”? wth?).  I think the core of the books is supposed to be about civilization and what it means to create a society, but that falls short as well. Honestly, the whole Pax concept seems like junior-high level discussion of the founding principles of a society.

I certainly wouldn’t warn anyone off this book, but I would enter into it with very low expectations for people who enjoy in-depth exploration with colonization, botany, or political philosophy. It’s an alright story that attempts to get a little deeper than your average book, but in an inexpert manner.  I did best reading one section at a time, treating each as a little novella unto itself. I wonder what would have happened had Burke given it Wells’ Murderbot treatment,  and released a series of tight little novellas. Although honestly, it wouldn’t have done as well without major reworking, because it lacks one identifiable character, besides Stevland.

avid reader and Goodreads reviewer looking for a home.
View all posts by thebookgator →
This entry was posted in Book reviews, Science fiction and tagged sci-fi. Bookmark the permalink.