This is considered The Definitive Reference for creatures in the listed areas (there’s a similar set for Hawaii). I’m a biology nerd and snorkeling enthusiast, and I decided it was time to up my game. Sure, you can go out to the reef, look for ‘stuff,’ then go back to dry land and try to remember and identify what it is you saw. But the trouble is, many marine things are quite adept at camouflage, and aren’t easy to spot. So knowing what you are looking for helps. There can also be regional variation, so while you may be looking for certain colors in a creature, it may show up in a different one.

The book is divided into sections based loosely on the evolutionary tree, specifically Phylum. When it comes to most of the observable sea creatures, looks are usually pretty different in each phylum, so it is actually usable for people that know nothing about it. Groups covered are Sponges, Cnidarians (mostly jellyfish), Comb Jellies, Flat & Ribbon Worms, Segmented Worms, Crustaceans, Bryozoans (colony creatures), Mollusks, Echinoderms (stars, urchins cucumbers), Tunicates. Oh, ok; you can orient faster if you remember a little bit of your evolutionary tree, but only at the top levels.

Each section is preceded by a short 2 to 4 page information on the phylum, which could be interesting for those who want to understand what some of the commonalities are in the following animals. It is usually accompanied by large ink drawings that help illustrate the points in the text.

This truly is an ‘identification’ book, which means there is a large color-plate picture–never more than three evenly spaced per page–with a short description next to the picture that contains scientific name, common name, size range and normal depth it is found. On the opposite side are notes about the species: Visual ID: descriptions & variations in color; Abundance & Distribution: where it is found; Habitat & Behavior: where it is on the reef, some behavior notes, and occasionally a Note on how it interacts with humans (helpful, when so many marine things are stingy).

Zooanthids, which are members of the Cnidirians. These were new to me and are pretty much upside-down jellyfish. 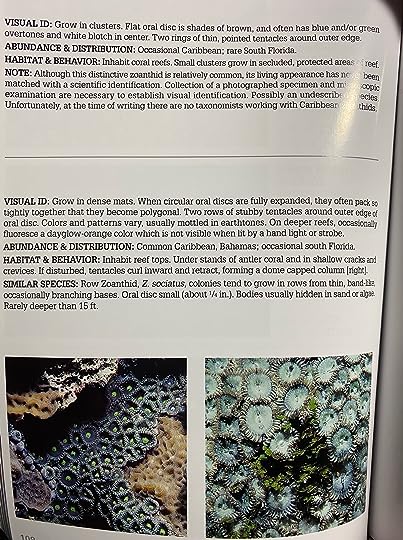 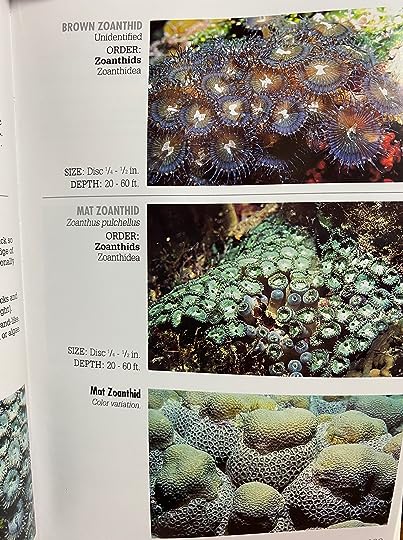 The trouble is that–no surprise, here–it’s not like a team is being paid to do a comprehensive survey and update every ten years. This was first published in 1992, and updated in 2002. Humann makes a note of the lack of information occasionally. In this book especially, I often observed the notation, “Possibly an undescribed species. Unfortunately at the time of writing there are no taxonomists working with…” I appreciated it, but found it somewhat sad–there’s so much to know about our oceans, even in the reachable areas, and we are losing the opportunity to find out as reef quality rapidly diminishes.

Because the plates are on photo-quality paper, it’s a bit heavy. The series of three books (creatures, coral, fish) are a bit heavy to be taken together on vacation. My solution has been to turn some of the more common creatures into flashcards for me to learn/review before travel. Good for a photo reference at home for identifying from pictures.

avid reader and Goodreads reviewer looking for a home.
View all posts by thebookgator →
This entry was posted in Book reviews, Non-fiction and tagged four star, my library, non-fiction, science. Bookmark the permalink.