Tales From the Folly by Ben Aaronovitch 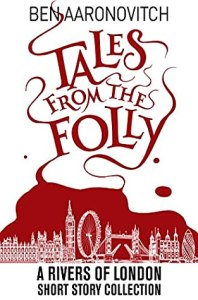 Mostly as advertised, a short story collection set in the Peter Grant universe, although it’s worth clarifying that Peter does not appear in perhaps half the stories. I do appreciate that these were made available to fans at large, as the majority of the pieces were ‘bonuses’ inside the Waterstones hardcover editions, and as such, not widely available. Only one piece is unique to this edition, ‘Three Rivers.’ Sadly, I think this is one I will be bypassing in hardcover, as I happen to have a few of the Waterstones editions, and while the short stories are certainly polished, they usually lack the Grant flair and magic. A Rare Book, which was available as an Audible freebie, is by far my favorite, as read–of course–by Kobna.

Ben does an intro to each piece, and mentions that ‘Home Crowd’ was one of his first tries at a short story. I’d say that squares with my reading of most of the pieces: he has trouble with the endings. This matches his writing style as a whole, however, with loads of exposition and detail, neither of which is suitable to the short story form.

The Home Crowd Advantage–was available for free on the website.◆◆◆ Peter is called to a ‘weird stuff’ disturbance at a cafe during the 2012 Olympics. Nightingale is out of town, so it falls on him to deal with it. I enjoyed it, but the ending felt excessively short. I feel like this was changed from the website version.

The Domestic–bonus in Waterstones edition of Whispers Underground. ◆◆◆ A constable investigating what seems to be a domestic abuse is convinced that ‘weird stuff’ is going on, and Peter is called. He meets the woman living in the flat and her visitor. Has a bit of a horror-story feel that we got in Rivers Underground. Again, underdeveloped for a short.

The Cockpit–bonus in Waterstones edition of Broken Homes. ◆◆◆ 1/2 Ghost story in the Piccadilly Waterstones bookshop, investigated by Peter and Leslie.

The Loneliness of the Long-Distance Granny–bonus in Waterstones edition of Foxglove Summer. ◆◆◆ Peter, Bev and not-Nicky stop at a petrol station and Peter offers to help two men whose car has broken down. I rather liked this one, although the ending felt overly pat and somewhat of a cheat. Has one of my favorite openings:

“There’s something uniquely dangerous about a motorway services station in the dead hours of the night. You can feel it as you pull off the slip road and cruise through the sodium wastes of the empty car park to stop by the sad little strip of landscaping that separates the vehicles from the children’s play area.”

King of The Rats–short story for Cityread London 2015, also done in audio. Was available online. ◆◆ 1/2 Trick ending which will make fans howl, and potentially questionable canon.

A Rare Book of Cunning Device–short story for Cityread London 2017, also an Audible freebie. ◆◆◆◆ Peter, Nightingale and Professor Postmarten solve a problem at the library. Great dynamics between the characters, with the interesting puzzle of the book. Four stars, five for the Kobna version.

A Dedicated Follower of Fashion–bonus in Waterstones edition of False Value. ◆◆◆ A very hip 70s kind of dude and his squad are holed up in a deserted mansion. Kind of fun, kind of weird due to the voice, and again, abrupt ending.

Favourite Uncle–bonus in Waterstones edition of Lies Sleeping. ◆◆◆◆. Christmas story where one of Abagail’s friends asks her to investigate an uncle that visits once a year.

Vanessa Sommer’s Other Christmas List–bonus in Waterstones edition of October Man. ◆◆ 1/2. Very short story about Tobias Winter’s partner after she learns about magic and rethinks some things she’s seen at home.

Three Rivers, Two Husbands and a Baby–new to this collection. ◆◆◆ One of the detectives and his partner are planning nuptials when a baby is discovered down by the river. Good thing there are some ladies next door to provide advice. Feels more like a conversation that could have happened in the course of the novella and got cut out because it was a bit too long. Not really any driving plot. Still, lots of ‘world of the Folly’ flavor.

Moment One–blog published short-short, between Nightingale and Oswald. Lovely fragment, but this is truly just a fragment of writing. Unratable.

Moment Two-short-short of Reynolds on an investigation. A lot of ‘mama says’ and prayer talk. Sounds unbelievable in relation to the Reynolds we may love to hate.

Moment Three–blog published short story, Tobias reports back to his boss after he discovers that the Folly has taken on an apprentice.

avid reader and Goodreads reviewer looking for a home.
View all posts by thebookgator →
This entry was posted in Book reviews, fantasy, Urban fantasy and tagged my library, short stories, urban fantasy. Bookmark the permalink.