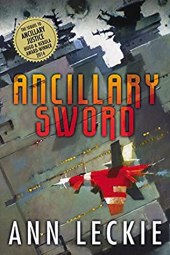 In a move perhaps unsurprising to no one, I continue to swim against public current on Leckie’s Ancillary series. I had been warned that the pace of the second book was oh-so-very-slow and contained gallons of tea. Be warned that everything from here on out is spoilery in one form or another. There is simply no way I’m going to remember either what went on or my reactions.

The tea part was true; the pacing, not as much. I actually I found it to have more internal tension than the first book, which was non-existent in the parallel timeline. However, here Breq ends up involved in a series of puzzles that kept me intrigued. In the first one, the ship is preparing to gate to Athoek Station. Breq is very tightly wound, tense and angry with the crew, and neither they nor the reader has any idea why. The problem and solution, when it becomes apparent, is both clever, evil and harsh. It also gives the reader more insight into the process of making ancillaries and the utter callousness towards human life.

Once arriving through the Gate, they are faced with the puzzle of an ancillary Sword running from them toward a permanent Ghost Gate, though they hailed as friends. That resolved, somewhat, Breq is confronted at the Station with the puzzle of the Underground, an unsanctioned habitation that was previously damaged and left unrepaired. Captain Hetnys, of the Sword that had run away, is parochial and suspicious of alien infiltratrators, and the Station Administrator is hardly any better. When the alien translator is killed because of a malicious prank by the sociopathic Raughd, daughter of an influential citizen, Breq is forced to go into a ritual morning in hopes that the alien Presger will not take action against the Station.

This then, is where it goes off the rails. The next puzzle is the socio-economic culture of the planet, and the tea plantation–formerly a temple–where Breq is residing. It ends up largely being an exploration of sharecropping, and contains large paragraphs of didactic text detailing the ethnic and economic injustices. Perhaps as part of the trip here, Breq discovers two final puzzles: the particularly fine and ancient tea set that Captain Hetys supposedly procured, and that of a peculiar ethnic population distribution. Once Breq returns to the Station, she sends her own Ship and Seivarden on an investigation run.

Because of all these small puzzles, I was drawn along and had a hard time putting the book down. However, when we reached the tea plantation section, I found myself particularly disappointed with the turn of the writing. Though some of the social issues had been simplistic up to that point, the plantation seemed to drag on, being more concerned with ‘slice of life’,’ perhaps reader education, and a discussion on ‘justice,’ than moving the greater arc forward. Over a hundred pages of the book are wasted on discovering those final two puzzles.

At the end, I found myself puzzled that Breq seemed concerned about justice on the plantation. Not that I minded it as an issue, but as Breq pointed out, “And over the ridge lived dozens of Valskaavyans, they or their parents or grandparents transported here for no better reason than to clear a planet for Radchaai occupation, and to provide cheap labor here.” Breq, as she mentions, is thousands of years old in the Empire. Why does she care? Perhaps I’m missing the point, because I don’t think Breq knows what she is doing. Though she says they need to prepare to be closed-off from other systems, does she realize this is all tea plantation, and no one has done anything to change tea to vegetables? Is she stabilizing the society or destabilizing it? Even worse, I have the sneaking suspicion that Leckie doesn’t know what she is doing. Is this occurring because a millennia-old AI is mostly an independent human again? I’m missing the internal conflict that lets me know whether this is deliberate, and am left with the sinking sensation that this might just be sloppy characterization.

As a side note, narrative this time is in one time-line, although since Ship knows Breq is an ancillary, it allows Breq access to a bit more information than the average human. Thus, Breq occasionally ‘dips’ into the perspective of both officers, Seivarden and Tisarwat, and rarely, Lt. Ekalu. There’s no chapter or page breaks, only paragraph, so the first couple of times it is a bit disorienting, but after that, flows relatively well.

Verdict? Much more readable than expected, but much less sophisticated than expected. I had the feeling of watching one of those Olympic ice-skating routines where the skater aims for a triple something and ends up landing badly. I wish she would have tried a little less and performed perfectly. Yes, I still want to read the last.

Many, many thanks to co-readers Stephen and Nataliya for their insights and encouragement.

avid reader and Goodreads reviewer looking for a home.
View all posts by thebookgator →
This entry was posted in Book reviews and tagged female lead, robots, sci-fi. Bookmark the permalink.