Posted on January 5, 2022 by thebookgator 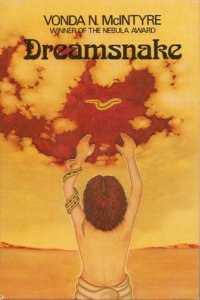 I abandoned this at about page 183. Why? I fully admit much of it is me, in this particular mood in my life at this moment. But some of the responsibility needs to go to McIntyre for writing what 100% seems like Women’s Sci-Fi, 1970s-Style. Call it the Female version of Dune. Not to mention the novel-length ‘plot’ feels a great deal a series of short stories strung together into a novel. It turns out that my feeling was not inaccurate; the book sprung out of an award-winning novellete.

What’s Women’s Sci-Fi, you ask? Oh, it’s simple stuff; it’s the stuff that’s about being a female and owning (female) power. In the 1970s, it also includes sexual inequity, possibly insta-love with a man who struggles with women’s equity, and quite probably about rape. It’s always about being a biological and gendered girl in a structure that resembles the Quest of the (Male) Hero. If I sound dismissive, it’s only because I grew up in heavily genderized sci-fi and it appears that I can’t even revisit it for long. It reminded me a bit of Carol Nelson Douglas’ Six of Swords series.

So the premise is that this woman, nicknamed ‘Snake,’ is a healer, who uses her specially bred snakes and healer training to basically create individually tailored vaccines and cures. It’s pretty fucking brilliant for 1978, I have to say. Here we are, 2021 and CAR-T engineered cells are all the rage for curing cancer, which is essentially the same idea. At any rate, best I can guess, these ‘dreamsnakes’ actually come from alien/foreigners to the world who are holed up in a city that is controlled by a wealthy, hierarchical system. Shocking, I know.

This newly-minted healer is out, far past anywhere known to her, the post-apocalyptic wastelands, bringing vaccines and healing to the people trying to make a living on the edges of the world. Unfortunately, something not unsurprising happens to her dreamsnake, at almost the exact moment she forges a deep and lasting insta-love, and she’s left somewhat bereft.

Traveling happens, followed by an interlude with a trio of traders, where we can see how a three-way relationship may work. Then travel and an interlude at a village where the headman has been bold enough to ban indentured servitude but is blind to its inequities in his own enclave. We probably learn something about how awful and unequitable male relationships can be in this section. Back at the farm, the insta-love has decided to set off in pursuit of his object. The best thing I can say about this is that he’s portrayed in a very typically ‘feminine’ way, being very family-minded, relatively powerless and a caretaker spirit. Yay.

Then we set up the encounter with a ‘madman.’ I’ve no doubt I would learn some other thing about how generally male-female dynamics are abusive and sucky at this point, as the ‘madman’ uses the girl she rescued as an emotional lever.

What I’ve learned in my old age is that the most insidious chains are the ones we apply ourselves. I appreciate the consciousness-raising, of a sorts, and the idea that Snake is the hero in her own story. But the actual story-telling is too weak, and the plot points are too tired and familiar for me to want to stay in the world any longer, because it’s not going anywhere I haven’t already been.